VS Battles Wiki
Register
Don't have an account?
Sign In
Advertisement
in: Tier 6, Tier 6-C, Characters,
and 34 more 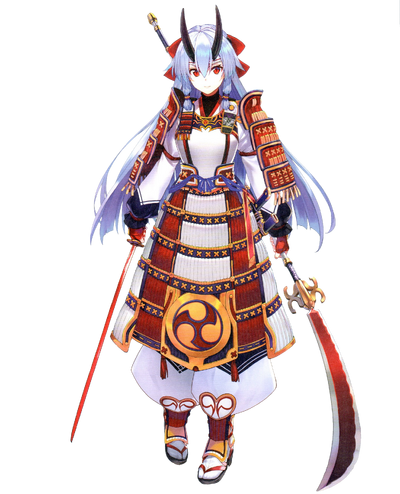 Archer Inferno is an Archer-class Servant able to be summoned by Ritsuka Fujimaru in the Epic of Remnant chapters of Fate/Grand Order. She is initially summoned by Ashiya Douman during "The Tournament of the Seven Heroic Spirit Blade-Masters".

Archer's True Name is Tomoe Gozen, a legendary figure from the waning years of the Heian period in Japan's history. The lover of Kiso no Yoshinaka, Tomoe was renowned for her beauty and grace. She was equally famous for her status as an Onna-bugeisha, a female warrior who was willing to face down gods and demons for the sake of protecting her beloved lord.

Age: 90 Years Old at the time of her death

Powers and Abilities: Superhuman Physical Characteristics, Master Archer, Swordswoman, and Naginata Wielder, Expert Hand-to-Hand Combatant (Was known to be a very famous brawler who was infamous for her tendency to twist off her foes' heads), Fire Manipulation (Can imbue her attacks with fire to substantially boost their power, range and speed), Statistics Amplification with Oni Kind Demon (Can boost her strength, speed and durability in the midst of combat), gains bonuses when faced with multiple opponents that are clustered together around her, Supernatural Luck, Minor Fate Manipulation (Servants with B-rank Luck or higher can change their own fates to evade inevitable outcomes such as having their hearts destroyed by Gáe Bolg), limited Mind Manipulation (Can use self-suggestion to improve her own battle prowess), Limited Power Nullification, Berserk Mode, Rage Power and Servant Physiology, Resistance to BFR | All previous abilities, in addition to superior Regeneration (At least High-Mid, likely Low-High. Heroic spirit swordmasters are able to come back if just one finger remains, and the only way they can be stopped for good is to make sure not a single speck of them is left behind.), Reality Warping, Soul Manipulation, Conceptual Manipulation, Information Manipulation, limited Mind Manipulation and Memory Manipulation (They can all summon a dueling arena in a manner compared to Reality Marbles, where the loser will have their soul consumed.), Invisibility (They are all capable of concealing their presence in a manner similar to Presence Concealment.), Aura and Fear Manipulation (They all possess a evil ki that induces fear on anyone around them)

Attack Potency: Island level (Is stronger than Archer and killed Girtablulu, one of Tiamat's generals, at the cost of her own life), Island level+ with Oni Demon Kind (Can boost her parameters and imbue her attacks with fire to substantially boost their power, range, and speed) and with Oṃ Ālolik Svāhā (It's a B-rank Anti-Unit Noble Phantasm which are superior to C-rank Noble Phantasms, which are comparable to A-rank attacks that can pierce God Hand). | Island level (Much stronger than their standard summoning, with Musashi stating that she wouldn't stand a chance against any of the Heroic Spirit Swordmasters without the Myoujingiri Muramasa),Island level+ with her Noble Phantasms

Stamina: High (Managed to fight her way through Tiamat's forces and match Girtablulu, slaying him before finally dying of her injuries)

Range: Extended melee range with her naginata and katanas, At least several kilometers with her bow

Standard Equipment: A naginata, katana, and a bow.

Intelligence: Arguably the most famous female warrior in Japanese history, Tomoe was renowned for her skill with a bow thanks to the innate natural talent granted by her Oni blood. Described as a "remarkably strong archer", Tomoe's skill greatly surpasses mortal men due to her countless feats of valor. She is equally formidable in close combat, being "a swordswoman... a warrior worth a thousand men", she can engage other Servants of the Knight classes in close combat with her trusted naginata and sword.

Weaknesses: Tomoe cannot attack while in Spirit Form. She is overcome with grief for not being able to be there for her lover in his last moments, which can be used to manipulate her.

Oṃ Ālolik Svāhā: Mantra of the Holy Avalokiteśvara: Tomoe's Noble Phantasm, which is a culmination of the monstrous power of her Oni blood, her grief over the loss of her lord, and her Buddhist faith. Calling upon Avalokiteśvara, the Buddha that presides over compassion and the principal deity of the temple that provided Yoshinaka's funeral services, Tomoe grabs her target and hurls them an incredible distance. Then, after reaffirming her sorrow over the loss of her lord through Avalokiteśvara's Mantra, she fires an incandescent arrow charged with enough flaming magical energy to detonate on contact, filling the sky with a radiance comparable to the sun itself.

Oni Kind Demon: A skill that represents Tomoe's Oni blood. At B-rank, it grants her the Oni's unique talent for combat, giving her the equivalent rank of Charisma, Mana Burst, Monstrous Strength, and Natural Monster skills.

Knowledge of Melees: A skill that reflects one's ability to engage as a single warrior in the face of multiple opponents, Tomoe's combat techniques allow her to persevere and succeed even when heavily outnumbered by enemy forces.

Blood Excitation: An ability she used unconsciously while in life, Tomoe is able to use self-suggestion to temporarily improve her connection to her Oni blood and increase her fighting prowess.