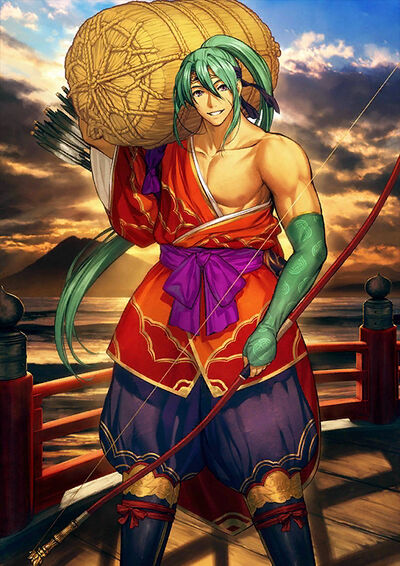 Archer is an Archer-class Servant able to be summoned by Ritsuka Fujimaru in the Grand Orders of Fate/Grand Order, first appearing as an ally in the sixth Singularity, Camelot.

Archer's True Name is Tawara Touta, a famous warrior from the mid-Heian period revered as the founder of martial arts in the Kanto providence. He had performed many achievements using a golden sword passed down from his ancestor, among those being the act of taking down a giant centipede demon requested to him by a dragon god, to which it has gifted him a bag of rice that will never run out as a reward. He then went on through hundreds of oni exterminations, later reintroducing himself as "Fujiwara no Hidasato", before gaining large fame by shooting down Taira Masakado, a samurai who was in secret an immortal demon.

Attack Potency: Island level (Has B-Rank strength, making him comparable to Saber under Shirou. Should at least be as strong as a much recent Servant such as Archer. Participated in several fights throughout Camelot with Chaldea and their allies, facing off the likes of Hassan of Serenity, Ozymandias' Sphinxes, Lancelot, and Great God Amun-Ra, a Demon God Pillar further enhanced by being turned into a Divine Spirit). Higher with Hachiman Prayer (As a B-Rank Noble Phantasm, it should be greater than C-Rank Noble Phantasms that are able to pierce through God Hand)

Lifting Strength: At least Superhuman (Even the weakest Servants are stronger than the finest humans. Can pull the bowstring of his bow, which is said to require the strength of five men to even pull)

Range: Extended melee range with sword, higher with bow and arrows and bale, much higher with Prayer to Hachiman

Standard Equipment: Sword and bow, his bale of rice

Intelligence: Touta was a warrior skilled in the use of swordsmanship and archery in his time known for many achievements of his own, notably in the ways of exterminating many oni's, with his most famous slayings being of the giant centipede demon and Taira Masakado who was, in secret, an immortal demon by taking his head off. He is also just as skillful in combat to use even his bale of rice, which doesn't have any combat functions of its own due to its nature of pouring its contents out as food, by using it as either a melee weapon or even as a thrown object at his enemies.

Hachiman Prayer - Shooting Through a Great Demon: The Noble Phantasm of Tawara Touta. It is a special marksmanship by means of a bow that requires the strength of five men to draw Touta has favored since his early days. Through a prayer to the god of archery and warriors, Hachiman, and with the divine protection of a dragon god that dwells in a lake, Touta fires an arrow high up into the air where it transforms into a water dragon that then flies itself towards a group of enemies. Due to the anecdote of slaying the giant centipede demon, it gains a bonus damage effect against any demonic type beings.

Bale of Inexhaustibility: A secondary Noble Phantasm of Touta's. It is a bale of rice that never runs out, granted to him by a dragon god after exterminating a giant centipede demon. Despite its incredible EX-Rank, it doesn't serve any combat functions other than being able to function as a melee and thrown weapon. Instead, its ability is to serve as a way to feed others, being able to create enough food to easily sustain a village.

Independent Action: The ability to remain independent and exist in the world without the magical energy supplied by a Master, allowing the Servant to act autonomously and the Master to save their own magical energy for spells. At B-Rank, Touta is capable of remaining active for two days even without a Master. However, this is the ideal value achieved by maximally conserving mana and avoiding battle and Noble Phantasm usage.

Magic Resistance: An innate ability that grants protection against magical effects. Unlike the Resistance effect that merely rejects Magical Energy, this ability cancels the spells altogether. Touta's C-Rank cancels spells with a chant below two verses, but cannot defend against Magecraft on the level of High-Thaumaturgy and Greater Rituals.

Protection from Arrows: A special skill that allows Touta the ability to see and deal with any ranged attacks by predicting the profiles trajectories. So long as the shooter is in sight, Touta would be able to predict and track down their shots in order to defend against them. However, he will be unable to defend or dodge against ranged attacks that have a large area of effect or have a greater range to them. Additionally, he has a chance of automatically dodging projectiles that would be qualified as "arrows".

Protection from the Dragon God: A blessing from a dragon god Touta received thanks to his act of exterminating a giant centipede demon. Activated through usage of his Noble Phantasm, it grants Touta its power during any given battle he is.

Retrieved from "https://vsbattles.fandom.com/wiki/Archer_(Tawara_Touta)?oldid=5721357"
Community content is available under CC-BY-SA unless otherwise noted.