VS Battles Wiki
Register
Don't have an account?
Sign In
Advertisement
in: Tier 6, Tier 6-C, Tier Low 6-B,
and 40 more 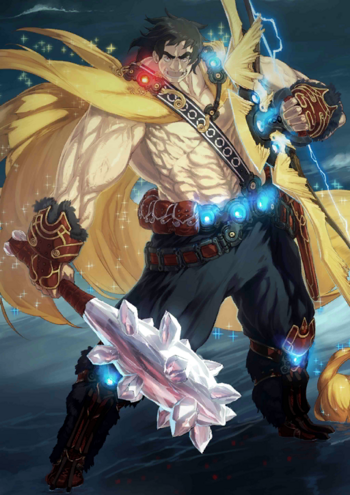 Archer is an Archer-class Servant able to be summoned by Ritsuka Fujimaru in the Grand Orders of Fate/Grand Order, appearing as an ally-Servant in the Atlantis Lostbelt.

Archer's real name is Orion, the superhuman that calls himself Greece’s best hunter. His manly and splendid body has the physical strength to bring down any beast no matter if it’s barehanded or with a bow. And he’s a hardcore playboy… but, most importantly he’s very cheerful… pitiful… human full of drama that was loved by the moon goddess Artemis.

Powers and Abilities: Superhuman Physical Characteristics, Servant Physiology, Weapon Mastery, Supernatural Luck and Minor Fate Manipulation (Servants with B-rank Luck or higher can change their own fates to evade inevitable outcomes such as having their hearts destroyed by Gáe Bolg), Energy Projection, Statistics Amplification (Capable of amplifying the power of his 1st and 3rd Noble Phantasms by either receiving Artemis' downpour of love or sacrificing his status as a Grand Archer and can buff himself with Artemis Agnos), Enhanced Senses (Capable of accurately sniping to the orbit and capable of operating without eyesight), Water Walking, Underwater Breathing (Type 2) and Weather Manipulation (Capable of running on the sea, forever operating in the sea and summon rainstorms with Blessings from Poseidon), Aura (Has staggering aura coming from Artemis), Blessed (By Poseidon and Artemis), Resistance to Explosion Manipulation (Resists secondary effect of his Noble Phantasm, not bursting into pieces upon usage)

Attack Potency: Island level (Has A-rank strength, making him comparable to Gawain and Heracles), higher with Artemis Agnos (Artemis Agnos is a B rank Anti-Army Noble Phantasm in which Artemis pours her love into Orion turning him into a One-Man Army), Small Country level with Stout Arms of Brutality (With Stout Arms he is capable of such brutality that even Demonic Beings and Phantasmal Beasts run in fear, he should be capable of crushing the chin of Cerberus, who should be comparable to Bellerophon), Low Complex Multiverse level, possibly Complex Multiverse level with Orion Orkos (Arrows forged by Hephaestus using Achilles' Akhilleus Kosmos and Diatrekhōn Astēr Lonkhē, it is described as "A plain and simple Noble Phantasm, it is an arrow that can pierce through Gods, reaching orbit in no time") | Low Complex Multiverse level, possibly Complex Multiverse level (Grand Servants are able to contend with Beasts thus he should be comparable to Kama and Kiara Sessyoin. As a Grand Archer, one of the Knight Classes, he should be superior to King Hassan and Solomon in terms of raw strength), higher with Ὀρτυγία Amore Mio (Sacrifices his Grand Archer status to massively buff his power)

Speed: Massively Hypersonic (Has B+ Agility and comparable to most combat-ready servants), Immeasurable attack speed with Orion Orkos (An Arrow capable of hitting Gods) | Massively FTL+ with Immeasurable reactions and combat speed (Should be able to keep up with Beasts like Kiara and Kama)

Lifting Strength: Class K (Comparable to Martha who stopped a speeding train, Achilles who stopped a rolling 300 ton jumbo jet, and Asterios who swam carrying the 100-150 ton Golden Hind galleon ship while injured) | Immeasurable (Should be comparable to Kiara)

Range: Hundreds of meters, thousands of kilometers with second and third Noble Phantasm.

Intelligence: Orion is the best Hunter in the entirety of Greek mythology, improved further by Artemis, the Goddess of the hunt. No Phantasmal Beasts, demonic beings or monsters can defeat and surpass his skills, not even his fellow heroes like Hercules or Perseus.

Weaknesses: He can't fight in Spirit Form. Need's to abandon his Grand Servant role to activate his third Noble Phantasm. He hates scorpions and is weak to scorpion venom.

Artemis Agnos: Moon Goddess' Innocent Affections: Artemis’ love downpours, and attempts a drastic strengthening, though temporarily. Love is heavy, somewhat physically heavy. The reason why it’s Anti-Army is because this Noble Phantasm is a blessing that turns one man into something comparable to one army. As a secondary effect, a normal person would burst and scatter, but Orion just feels muscular pain.

Orion Orkos: There is No Beast That My Arrow Can't Reach: Orion's second Noble Phantasm after he got arrows from Hephaestus, forged from Achilles' Akhilleus Kosmos and Diatrekhōn Astēr Lonkhē. A plain and simple Noble Phantasm, it is an arrow that can pierce through Gods, reaching orbit in no time. This can be only used twice and this use heavy amount of mana, enough to put Orion in near death after using all of it.

Ὀρτυγία Amore Mio: It is I, The One Who Shot Down a Goddess: Orion's third Noble Phantasm he got after Paris turning himself into an arrow by Apollo's Authority, then giving up his own Grand Archer status to fire it. Just like Orion Orkos, it is a simple Noble Phantasm, a strong arrow that can overpower Artemis and Zeus. Using this will result of his death, needing Master's command spell to fire it.

Independent Action: The ability to remain independent and exist in the world without the magical energy supplied by a Master, allowing the Servant to act autonomously and the Master to save their magical energy for spells. Archer's Rank in this skill is EX, meaning he needs no Master to act and can use high-cost abilities, including his Noble Phantasm.

Blessings from Poseidon: A subspecies skill of Divinity. Besides being able to run on the sea, he can eternally move inside the sea. Moreover, he can freely call rain to get advantage for some situations.

Curse of Scorpio: One of Orion’s numerous causes of death. He dislikes scorpions so much that is said that the constellation Orion withdraws when the scorpion comes.

Pressure of the Moon Goddess: A strong pressure that receives the name of the favor from his lover, the goddess Artemis. By applying a staggering pressure + buffs, the body is naturally tempered. Ranks up all statuses including Mana and Luck, and Strength in particular receives a double boost.

Stout Arm of Brutality: The stout arms that strangled a lion. In front of that simple violence, even demonic beings and Phantasmal Beasts run in fear. Tearing off coins is his strong point, and he can crush even the chin of Cerberus.

Bowman of Three Stars: Extolled as Greece’s first huntsman, and counting with Artemis’ blessing, his skill the best on earth. Having an anecdote of three stars as a constellation, he has acquired a skill with the bow exceeding that of heroes born in different times.

Note: Orion is unable to use Ὀρτυγία Amore Mio on his own, requiring Apollo to turn Paris into the arrow for him to shoot, meaning he shouldn't have access to it in a regular VS Thread due to being considered outside help.