VS Battles Wiki
Register
Don't have an account?
Sign In
Advertisement
in: Tier 6, Tier 6-C, Characters,
and 44 more 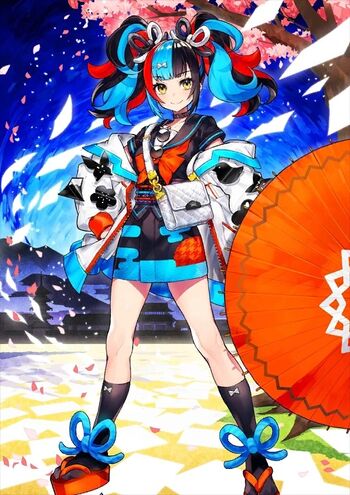 Archer is a Archer-class Servant able to be summoned by Ritsuka Fujimaru in the Grand Orders of Fate/Grand Order, appearing as an ally-Servant in the 2020 Valentine event.

Archer's real name is Sei Shonagon, the daughter of Kiyohara no Motosuke, one of the “Five men of the Pear Chamber” accredited with compiling the readings for the oldest collection of Japanese poetry in existence, the Man'yōshū.

Attack Potency: Island level (Is a combat-ready Servant and was able to fight against the likes of Medb and Abigail)

Speed: Massively Hypersonic (Has B-rank Agility and kept up with the likes of Raikou and Blackbeard)

Intelligence: While she is not a fighter, she is capable of combat nonetheless, capable of fighting the likes of Raikou. She usually moves according to her own emotions and doesn't think about much of her actions, but she is still extremely skilled writer and combatant.

Emotional Engine - Full Drive: The Pillow Book: Annotated: Letting herself overflow with emotion and creation, the Noble Phantasm is the materialization of the world she created within “The Pillow Book” brought into reality. In other words, a reality marble. The world rewritten by her holds this feeling at its core “The view of something nostalgic that I saw once upon a time”. From this, the souls of enemies that become trapped within the reality marble will slowly be eaten away at. Sadness, nostalgia, sympathy… The overwhelming burst of emotions makes their hearts fall into chaos if they are to forget about the battle for even a glancing moment. Even if they were to be released from the girl who is in full control of this domain, they would suffer a devastating attack without even attempting to dodge it.

Independent Action (Self-Centered): The ability to remain independent and exist in the world without the magical energy supplied by a Master, allowing the Servant to act autonomously and the Master to save their magical energy for spells. Thanks to her A-Rank in this skill, Shonagon can survive for a week without a Master under ideal conditions and even engage in combat without risking her existence except for using her Noble Phantasm.

Magic Resistance: An innate ability that grants protection against magical effects. Unlike the Resistance effect that merely rejects Magical Energy, this ability cancels the spells altogether. Shonagon's Magic Resistance is rank of C, cancels spells with a chant below two verses. It cannot, however, defend against High-Thaumaturgy or Greater Rituals.

Snow Atop Mount Xianglu: This skill's current effect is unknown.

One Vehicle Teaching: This skill's current effect is unknown.

Song of the Poet: Though being part of the “Thirty-Six Heian-era Immortals”, “Thirty-Six Female Immortals of Poetry”, and having appeared within “Ogura Hyakunin Isshu”, she continues to tell herself and everyone around her that she finds it difficult to write poetry. Even still, the verses she composes at times would raise the spirits of people, while scaring away unruly men at others.

Afusaka no Seki: Hangu Pass may open with singing birds, however, the gate of love is not so simple. This unconquerable Afusaka-no-seki, First of all to get through it, unsurprisingly...

Starry Skies: As the night grows in darkness, the stars shine ever so bright. Subaru, Hikoboshi, Taihakusei, Nagareboshi… The power she unleashes is full of radiance like the stars. 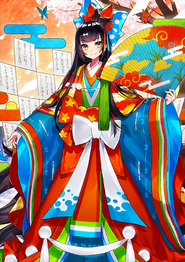