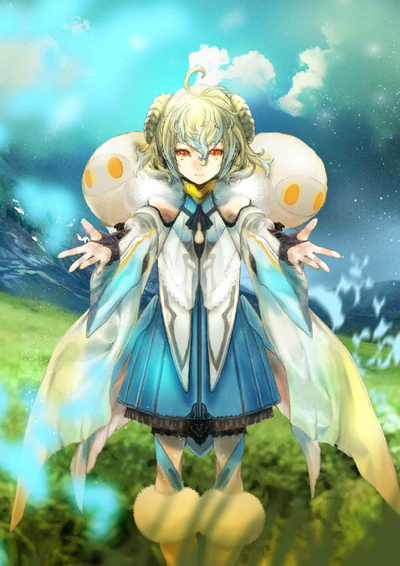 Archer is a Archer-class Servant able to be summoned by Ritsuka Fujimaru in Fate/Grand Order.

Archer's True Name is Paris, the brother of Hector. The sheep that follows him is in fact, the Greek god Apollo. Paris is the younger brother of the Hero of Troy and member of the Nine Worthies Hector, who stole Helen away from King Menelaus (though it was promised by a goddess), causing the Trojan War. Struggling with Hector, even after his brother died, Paris played an active part in defeating Achilles.

All previous abilities plus Nanotechnology (Most Servants in Atlantis managed to get nanomachines from the remains of the Gods, giving them the ability to heal themselves and increase their capabilities in combat), Resistance to Disease Manipulation (Nanomachines gives resistance to diseases)

Attack Potency: Island level (Has D-Rank Strength, making him comparable to servants like Emiya), Island level+ with Troia Velos (As an A-Rank Anti-Unit Noble Phantasm it should be comparable to Arondight Overload) | At least Island level (Was able to to keep up with Achilles and managed to take many nanomachines amped soldiers)

Intelligence: Despite willingly charging into battle every time he is summoned Paris is a self proclaimed novice combatant, referring to himself as a weak and unskilled fighter on numerous occasions, often relying on Apollo to assist him in battle in order to fight properly.

Troia Velos: Arrow of a Promising Conclusion: The first Noble Phantasm of Paris, an all purpose arrow released with the power of the sun god Apollo. It is able to overcome any obstacle to always hit the enemy's vitals. A famous hero killer, it is not only possible to defeat Achilles, but also Siegfried, who has been fortified by the blood of a dragon, as long as the weaknesses are known. However, in order to do so, the enemy's vital point must be known, and it depends on the enemy's agility, luck, rank of magic, and so on.

Distihia Milya: Golden Apple of Discord: The second Noble Phantasm of Paris, an apple of misfortune. An apple that brings about discord with the power of the gods. This apple, which was supposed to be gifted to the most beautiful goddess, caused the Trojan War. The apple itself has no destructive power, but as a result, it is a dangerous substitute that causes massive destruction to both sides. A powerful but dangerous magical artifact that ensnares the mind of the target, it can bring disaster if wielded improperly. For resistance, luck and mental tolerance are important.