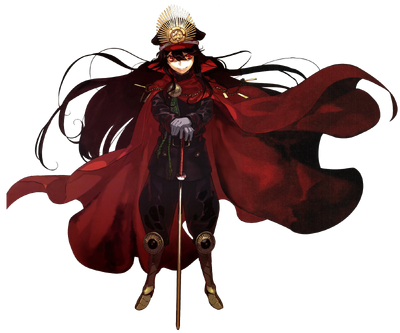 Demon Archer is the Archer-class Servant of Artoria during the Strange Tales of the Imperial Holy Grail of Fate/KOHA-ACE.

Her true name is Nobunaga Oda, one of Japan's three great unifiers, renowned for her brutality and cunning, for which she gained the title of "Demon King of the Sixth Heaven". She adopted Western weapons and tactics into her own, giving her an exceptional technological advantage over her foes and allowing her to defeat many great enemies one after another before she was betrayed and defeated at Honnō-ji.

Powers and Abilities: Superhuman Physical Characteristics, Expert Markswoman, increases in power against those with high Divinity and/or Mystery, Pocket Reality Manipulation with Demon King of the Sixth Heaven, Supernatural Luck, Minor Fate Manipulation (Servants with B-rank Luck or higher can change their own fates to evade inevitable outcomes such as having their hearts destroyed by Gáe Bolg), Minor Mind Manipulation and Social Influencing with Charisma, Limited Power Nullification and Servant Physiology

Attack Potency: Island level (Comparable to other Servants, such as Archer. Can fight on par with Okita), higher with Tenka Fubu (Grants her modifiers to all her skills the higher her opponent's Divinity and/or Mystery are). Varies with Three Thousand Worlds (Its effectiveness varies on its target's Divinity/Mystery, making it extremely powerful against legendary, mythological heroes but considerably weaker, though not to the point of being useless, against heroes with normal human origins).

Speed: Massively Hypersonic (Comparable to other Servants, such as Saber, can keep up with Okita).

Standard Equipment: Her sword, and any amount of rifles that she can materialize from her magical energy.

Intelligence: High. In life, Nobunaga Oda was an incredibly successful and cunning warlord with a keen eye for diplomacy and strategy. As a Servant, she maintains this intelligence as a brilliant strategist capable of securing victory before a conflict through her intellect and skills. She revolutionized the Japanese military, changing the ways wars were fought with her use of Western weaponry and tactics. She is a flexible and creative thinker, though she is said not to be bound by common sense and is somewhat arrogant.

Weaknesses: Nobunaga's abilities become weaker the less Divinity and/or Mystery her opponents have and she cannot fight in spirit form.

Three Thousand Worlds: Three Line Formation: Nobunaga Oda's Noble Phantasm, taking the form of her famous strategy of "three lines of fire". It summons three thousand arquebuses that line themselves up in her surroundings, firing in every single direction in a manner she compares to Gun fu. Due to the effects of Tenka Fubu - Innovation, it increases in effectiveness the higher her target's Divinity and Mystery is, rising to EX-rank under the proper circumstances. It is also quite powerful against Servants with the Riding skill due to the anecdote of her decimation of Takeda Shingen's famous cavalry at the Battle of Nagashino. Against those with low Divinity/Mystery, or even worse, those with no Divinity, low Mystery, and no Riding skill, it is much weaker, though still a formidable Noble Phantasm capable of cornering an opponent through the sheer amount of rifles and destructive power.

Papiyas, the Demon King of the Sixth Heaven: The true Noble Phantasm of the Demon King Nobunaga Oda. Born from the burning of Mount Hiei and her efforts to destroy Shintoism and Buddhism, it is a Reality Marble that takes the form of a blisteringly hot, scorched hellish landscape. As with her Tenka Fubu - Innovation skill, it shows its true power against those with high Divinity and Mystery, giving her "absolute power" against them. Within her Reality Marble, it is difficult for these beings to even maintain their existence, while to those with low Mystery, it's just a bit hot.

Independent Action: The ability to remain independent and exist in the world without the magical energy supplied by a Master, allowing the Servant to act autonomously and the Master to save their own magical energy for spells. Due to her rank of B, Nobunaga can stay in the world for up to two days without a Master, though this is the ideal value achieved by conserving her magical energy.

Magic Resistance: An innate ability that grants protection against magical effects. Unlike the Resistance effect that merely rejects Magical Energy, this ability cancels the spells altogether. Nobunaga's B-ranked Magic Resistance protects her from any spell with a chant below three verses, making it difficult for even High-Thaumaturgy and Greater Rituals to harm her.

Charisma: The natural talent to command an army. Increases the ability of allies during group battles. Archer's B- rank skill is sufficient to rule over a nation as its commander, though its effects are not completely even.

Demon King: An ability similar to Innocent Monster in many ways, representing one who was called a monster in life and has been twisted by history. Archer's title of "Demon King" is one she called herself, allowing her to activate and deactivate this skill as she pleases without any negative penalties. She can change her appearance slightly, sometimes appearing smaller and younger, and sometimes, older and taller.

Strategy: The skill to see the broader perspective of a battle, involving diplomacy and logistics, allowing one to seize victory before the battle even begins.

Tenka Fubu - Innovation: A conceptual revolution, subjugating the old to replace it with the new. It boosts all of Archer's skills and abilities when facing an opponent with high Divinity and/or Mystery, or those that are guardians of the "establishments". Mystery is the source of supernatural phenomena, accumulating over time and growing with age; those with strong Mystery are those with magical abilities and legends, or those who never existed at all, including the likes of King Arthur, "Sasaki Kojirou", Jack the Ripper, and Jeanne d'Arc. Against such figures, Archer has an absolute advantage.

On the flip side, as one's Divinity and/or Mystery drop, Archer loses these bonuses and actually ends up becoming weaker as they reach lower and lower peaks. She is weak against Heroic Spirits of the modern era, where the World's Mystery is thin and receding, and against those without any supernatural origin, such as Li Shuwen, Lu Bu, Francis Drake, William Shakespeare, Hans Christian Andersen, and all nineteen Hassan-i-Sabbah.

This skill also affects Archer's Noble Phantasms, and she generally judges how effective her abilities will be by simply shooting an opponent and gauging how well that goes. 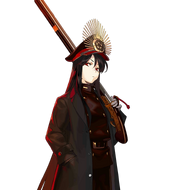 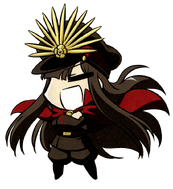 Demon Archer in Capsule Servant
Add a photo to this gallery