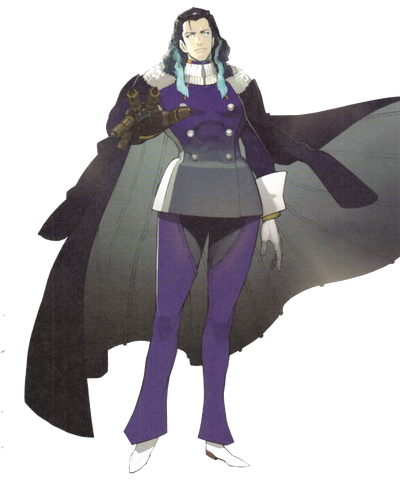 Archer is an Archer-class Servant able to be summoned by Ritsuka Fujimaru in the Grand Orders of Fate/Grand Order.

His True Name is Nikola Tesla, a man recognized as a genius scientist, a "worthy rival" of the King of Inventors Thomas Edison, who "controlled electromagnetism" from the 19th century to 20th century. Recognized as a "Prodigy Without Equal" and the "Modern Prometheus", he was one of the great scholars who "clarified the power of thunder and lightning", previously described in various mythologies as a "legend of god." The "man who revealed Zeus' thunder to the world", he brought about "electricity" to human civilization.

Age: 86 at time of death of his real-life counterpart

Powers and Abilities: Superhuman Physical Characteristics, Genius Intelligence, Magic, Flight, Energy Manipulation, Lightning Manipulation, Spatial Manipulation and Time Manipulation with System Keraunos (Grants Tesla power control over electromagnetism. When unleashing its full might, it causes generates an artificial space-time dislocation), Preparation, Wind Manipulation, Absorption (His Galvanism skill allows him to absorb ambient magical energy as well as incorporeal magical attacks such as lightning, wind, and energy blasts and convert it into electricity for his own use for rapid-self repair, reinforcement, and his own Noble Phantasm), Limited Power Nullification and Servant Physiology

Attack Potency: Island level (Although he possess D-rank Strength, he should be at least as strong as a much more recent Servant like EMIYA). Continent level with System Keraunos (Has a higher Rank than Excalibur and as such should be superior. Threatened to destroy America in a single attack), may be able to ignore conventional durability (Obliterates the target with a quasi space-time dislocation when spoken its true name) | At least Island level (According to Roman, his summoning, when empowered by the Grail and Demonic Fog, was detected as a "Great Hero" scale, allowing him to be strong enough to fight against Mash, Mordred, Tamamo and Kintoki). At least Continent level with System Keraunos (Likely stronger than before), may be able to ignore conventional durability

Durability: Island level (As a combat-ready Servant, Tesla should be at least this durable.) | At least Island level (Stronger than ever due to the Grail and Demonic Fog empowering him at the time of his summon. Fought Mordred, Mash, Kintoki, and Tamamo-no-Mae)

Stamina: Tireless as long as he has enough magical energy

Range: Standard melee range physically, several meters with his lightnings, several hundreds of meters, if not Continental with his Noble Phantasm

Intelligence: Extraordinary Genius. Nikola Tesla was considered to be among the greatest intellectuals of the 19th and 20th century and is a world-famous physicist/electrical energy who revolutionized the world with his inventions, enough that he was given namesakes and titles such as the "modern Prometheus" and a "prodigy without equal", with his intellect being matched only by that of the man known as the King of Inventions himself, Thomas Alva Edison. As a Servant, Nikola Tesla is boastful of himself when it comes to his intellect, claiming to have the surpassed the likes of several thunder gods such as Indra, Zeus, and Perkunas but is nonetheless a capable Servant who can compete with and keep up with many Servants despite his status as a much recent Servant due to being a pioneer that gave a turning point in mankinds advancement.

Weaknesses: He cannot fight in Spirit Form. Using System Keraunos by its True Name uses up a lot of mana, though this can be countered by his Galvanism ability to replenish his reserves.