VS Battles Wiki
Register
Don't have an account?
Sign In
Advertisement
in: Characters, Male Characters, Fate,
and 27 more 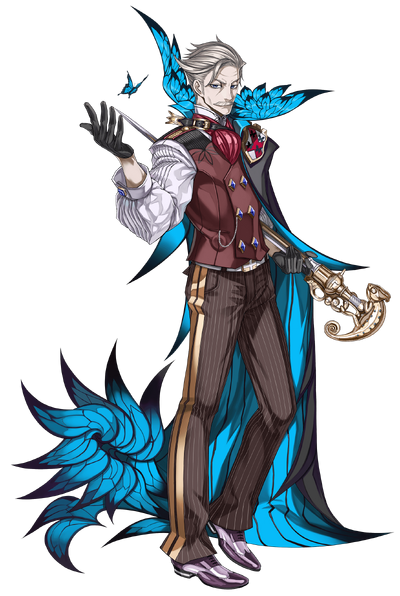 "Archer of Shinjuku" is an Archer-class Servant able to be summoned by Ritsuka Fujimaru in the Grand Orders of Fate/Grand Order. He debuts in the Shinjuku Sub-Singularity as the main antagonist.

Archer's True Name is James Moriarty, the greatest nemesis of Sherlock Holmes. Despite his relative obscurity in the original Sherlock Holmes series, he was outstandingly intelligent, being infamously known as "The Napoleon of Crime" and having a criminal network stretching all across Europe. Holmes deliberately instructed Watson to downplay Moriarty's role to limit his notorious reputation and infamy.

As a Servant, Moriarty is part of a fusion between himself and one other named The Freeshooter from the German opera Der Freischütz, a huntsman who sold his soul to a demon to obtain bullets that would never miss their target.

Tier: 6-C, Varies from Low 6-B to 5-B with The Dynamics of an Asteroid

Name: Archer of Shinjuku, James Moriarty, "The Napoleon of Crime," "King of Logic"

Age: Summoned at around 50 years old

Powers and Abilities: Superhuman Physical Characteristics, Genius Intelligence, Weapon Mastery, Possesses special bullets that will always hit his targets even when facing away from them, Memory Manipulation (Utilized Hypnosis to erase the memories of Babbage), Minor Mind Manipulation and Social Influencing with Charisma of an Evil Genius, Supernatural Luck, Fate Manipulation (The End of A Spider Thread allows him to avoid negative fates, outcomes, and consequences. In addition, Servants with B-rank Luck or higher can change their own fates to evade inevitable outcomes such as having their hearts destroyed by Gáe Bolg), Absorption (Absorbed Sherlock), Limited Power Nullification, Servant Physiology, Resistance to BFR

Attack Potency: Island level (Fought against Jeanne Alter, Saber Alter and EMIYA Alter), Varies from Small Country level to Planet level with The Dynamics of an Asteroid (An A+ Anti-Army Noble Phantasm comparable to Bellerophon, Balmung and Excalibur Galatine. However, it is capable of being amplified to Anti-City and Anti-Country, increasing its power to a significant extent. He can increase its power with preparation, to the point that he can destroy the planet)

Range: Extended melee range, several hundred meters with firearms, up to Planetary with The Dynamics of an Asteroid

Intelligence: Moriarty is a man whose intelligence rivals that of his archenemy, Sherlock Holmes. A man who gained the infamous name of "the Napoleon of Crime", he once ran an entire criminal network that stretched throughout all of Europe, showing his charismatic ability to command such a large scale that Holmes deliberately instructed Watson to limit the mention of Moriarty in his adventures to as minimum as possible in fear of his influence being exerted upon the world. He still retains his crafty and clever nature, having cooperated with the Demon Pillar Baal in their plans to destroy both the planet and Ritsuka Fujimaru, a plan that would have succeeded if not for feeling attached to the latter and subconsciously holding back against them. As a Servant, Moriarty shows a surprising amount of skill in fighting, particularly through his coffin-shaped weapon and being able to fight either at a distance or at close range by swinging it around as a battering weapon, allowing him to effectively fight at any range.

Weaknesses: Cannot fight in Spirit Form, Reichenbach hurt his back when he swings it around too much

The Dynamics of an Asteroid: The Ultimate Crime: A Noble Phantasm embodying Moriarty's goal of destroying the planet as a means of committing the ultimate crime. Normally, it is only Anti-Army because it involves using whatever Moriarty has on his person, this being his coffin weapon where he unleashes an array of missiles and bullets to rain down on his enemy before shooting a laser beam up close. He can even amplify its power to raise it to either Anti-City or Anti-Country under the right circumstances, however, making it far more devastating than normal.

In the Shinjuku Singularity, going under the name Catastrophe Crime: Ultimate Crime, James Moriarty was capable of bringing this Noble Phantasm up to its highest extent. Through a series of steps he took before and up to the events of Shinjuku, he was able to pull down a meteor with the Freeshooter's power and have it enter through a bunker tower that acts as a barrel for it that will shoot it towards the planet, killing it as a result.

Independent Action: The ability to remain independent and exist in the world without the magical energy supplied by a Master, allowing the Servant to act autonomously and the Master to save their own magical energy for spells. At A+-Rank, Moriarty can stay materialized in the world even after the death of his Master and draw upon high amounts of magical energy to use his Noble Phantasm without issue.

Magic Resistance: An innate ability that grants protection against magical effects. Unlike the Resistance effect that merely rejects Magical Energy, this ability cancels the spells altogether. Moriarty possesses a paltry D-Rank in this skill, only allowing him to cancel single-action spells.

Charisma of an Evil Genius: A skill displaying a Servant's natural charm and ability to command and, in Moriarty's case, control an evil organization. At A-Rank, Moriarty is so charismatic that he could command the entire world from the shadows. Like the normal Charisma skill, he should also be able to give a boost to his allies as well.

Magic Bullet Shooter: As a result of his fusion with The Freeshooter, Moriarty possesses special bullets that will always hit their target, even if he is facing the opposite direction.

The End of the Spider Thread: A skill denoting Moriarty's ability to do evil, defy order, and escape karma and punishment. He can force negative fates and consequences to face away from himself. No matter what happens to society, Moriarty will not be affected while their goodness becomes overturned.

Note: The reason The Dynamics Of An Asteroid is not Low 1-C at its highest end is because the Earth Moriarty had prepared in was doomed, with no Counter Force to protect it as well as no other differences to the Real World Earth.