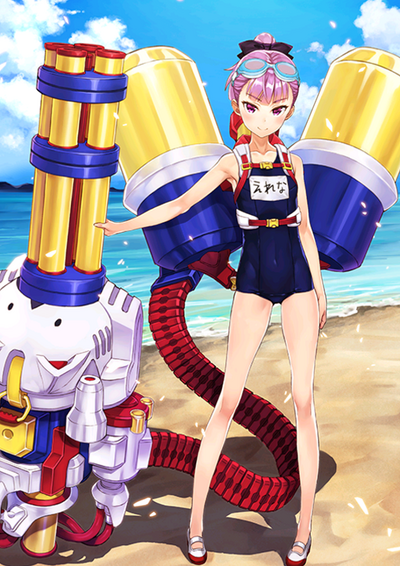 Archer is a Archer-class Servant able to be summoned by Ritsuka Fujimaru in Fate/Grand Order.

Archer's True Name is Helena Petrovna Blavatsky, a famed occultist from the 19th century and the founder of theosophy, which looks to the ancient past to find the path to salvation and enlightenment. While normally a Caster, this version of Helena was changed into an Archer in response to the summer season.

Powers and Abilities: Superhuman Physical Characteristics, Weapon Mastery (Skilled marksman), Vehicular Mastery (Able to pilot the Sanat Kumara Wheel to such a masterful degree that if she werent given the NYARF to wield in combat she would have been classed as a Rider), Energy Projection, Supernatural Luck, Minor Fate Manipulation (Servants with B-rank Luck or higher can change their own fates to evade inevitable outcomes such as having their hearts destroyed by Gáe Bolg), Limited Power Nullification, Servant Physiology, Resistance to BFR

Attack Potency: Island level (Fought against Penthesilea, Artemis, Florence Nightingale, Yan Qing, and the latter again when they transformed into Quetzalcoatl), Island level+ with Apfel Schiessen (As a B+-Rank Anti-Army Noble Phantasm it should be comparable to Soaring Spear that Strikes with Death)

Speed: Massively Hypersonic (Has B Rank Agility making her faster than her Caster counterpart)

Intelligence: Aside from becoming more energetic as a result of her class change, Helena retains the genius intelligence of her Caster self with the added bonus of being both a skilled marksman with the NYARF system and a masterful pilot of the Sanat Kumara Wheel, tot he extent that not even she is able to distinguish if he is truly an Archer or a Rider.

Sanat Kumara Wheel: Venusian God, Silver Torus: The Neo-Noble Phantasm pulled out by Helena upon her class change. A Silver Torus, it is made of the same properties as the flying objects that appear when she activates her Noble Phantasm in her Caster form, and carries a different composition from any kind of matter found on Earth. During activation, countless flying objects appear, and pour a barrage of light beams into the surroundings. They cause violent explosions, but they will definitely never land a direct hit on Helena.