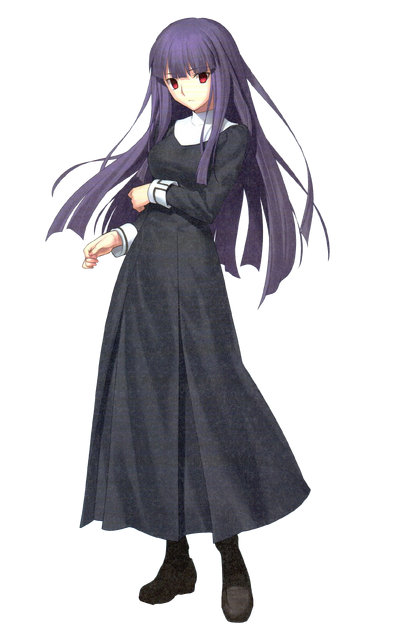 Archer is an Archer-class Servant that Ritsuka Fujimaru is able to potentially summon in Fate/Grand Order.

Her True Name is Fujino Asagami, a girl with Mystic Eyes that was originally an enemy of Ryougi Shiki in Kara no Kyoukai. She was a school girl who ended up developing a taste for murder after she was raped. But that is another place and time. When humanity was incinerated by the King of Demon Gods, she would be burned away with everyone else. However, he abnormal abilities did not go unnoticed by the greater powers at be. On the night before she would have burned to death, Alaya-Shiki recruited her as an agent of the Counter Force. She is sent to Chaldea as a Servant of Ritsuka Fujimaru. She was also deployed to the Garden of Order event although she did not appear on screen.

Tier: 9-B. Unknown with Mystic Eyes of Distortion

Powers and Abilities: Superhuman Physical Characteristics, Magecraft, Enhanced Senses, Clairvoyance, Durability Negation, Spatial Manipulation with Mystic Eyes of Distortion (Sees her targets on a flat plane that she can bend, fold, or rip), Madness Manipulation (A normal person would go insane from being in her current state of existence), Berserk Mode (While she is usually calm and coldly logical, when she loses control she will go on a rampage until her enemy has been destroyed), Immortality (Type 9. Her servant form is just the "Dream" of her human self, which has been weaponized by the Counter Force to work against the incineration of humanity. This is an illusion of a single night that she is seeing just before being burned to ashes, and which will simply disappear if the incineration of the anthropic principle is not overturned. As with other Counter Force servants, she can be deployed to various places and times for the protection of humanity, and even if she is killed she can still be deployed.), Forcefield Creation (Unconciously creates them when she fights), Limited Power Nullification, Preparation, Servant Physiology, Resistance to Pain Manipulation (She has no sense of touch)

Attack Potency: Wall Level (Has E rank strength, but even the weakest Servants are superhumanly strong, and can crush human skulls with their fingertips like eggshells. However, she primarily fights via the use of her mystic eyes). Unknown with Mystic Eyes of Distortion (Despite its potential for mass destruction, its capacity is reliant on Fujino's view rather than raw power. Due to her clairvoyance, it is unclear exactly how much she can see at one time. It is classified as an Anti-World Noble Phantasm, with an EX rank)

Speed: Massively Hypersonic (As a likely combat applicable servant with D rank agility, she should be at least this fast)

Durability: Island level (As a servant with B rank endurance, she should be superior to Lancer)

Stamina: As long as her master has mana, she should be able to theoretically fight indefinitely. She is also backed by the counter force due to being one of its agents, and thus should have an almost inexhaustible supply

Range: Extended melee range, Unknown with her Mystic Eyes (Their usage is tied to her field of view, which is augmented by both her clairvoyance and Noble Phantasm).

Intelligence: High. She is coldly logical and a realist, which allows her to take on her current state which would drive a usual person insane.

Weaknesses: She has constant pain in her stomach. She cannot fight in Spirit Form. She cannot bend something if she cannot perceive it in its entirety.

Vijnapti-Matrata: Mystic Eyes of Distortion: The maximum application of Fujino's Mystic Eyes of Distortion. It is an EX rank Anti-World Noble Phantasm. By employing her Clairvoyance, she takes on a bird's eye view with a much greater field of vision overlooking the entire battlefield. With her target now "confirmed by sight" she causes mass destruction, breaking physics and rending space.

Independent Action: The ability of a Servant to operate without a Master, allowing a Servant to act for extended periods of time without one. Fujino possesses an A+ Rank in this skill, allowing her to stay manifested in the real world even without the support of a master and can use her Noble Phantasm without issue. This is also a manifestation of her tendency to go strolling out by herself for one reason or another. Stalking and similar things are her forte. Even though running out of magical energy should be very tough for her, she does not take notice since her sense of pain is weak.

Magic Resistance: An ability that grants protection against magical effects. Unlike the Resistance effect that merely rejects Magical Energy, this ability cancels the spells altogether. Fujino is granted this ability as a benefit of being summoned as a Servant and, due to its D-rank, it cancels Single-Action spells but won't protect Fujino against more stronger, complex spells. This ability also provides resistance against indirect magical attacks such as Petrification, Hypnosis, and Spatial Manipulation.

Territory Creation: Usually a class skill for Casters, at B rank it allows for the establishment of a territory or workshop. This skill is granted to Fujino due to her eyesight possessing an ability close to Clairvoyance, which allows her to comprehend the space around her and see anyone behind shelter, with this coming close to a Bounded Field.

Mystic Eyes of Distortion: A so-called "superpower among superpowers", Among the many superpowers designated as mystic eyes, this one is of the highest grade. She views her target as if they were on a two-dimensional plane, which she can bend, fold, and interact with, ultimately twisting and violently ripping them apart. This is said to be done regardless of the strength of scale as long as "if it's a substance that exists".

Clairvoyance (Darkness): The exact nature of her clairvoyance is unknown. In life, she was able to see past visual obstruction, so she should still at least be capable of that. However, one application of this skill allows her take on a point of view likened to that of the Gods. Her view becomes that of an over looker. This would normally not be notably powerful, but when combined with her Mystic Eyes and Noble Phantasm, it allows for mass destruction.

Residual Sense of Pain: Deathly pains that repeat themselves despite having been completely cured. This skill is the Proof of her humanity. In order to seal away the girl's superpower, the Asakami clan has locked up her sense of touch, and as such, she feels no other pain beyond just these residual effects.

Note: Not to be confused with her human counterpart.