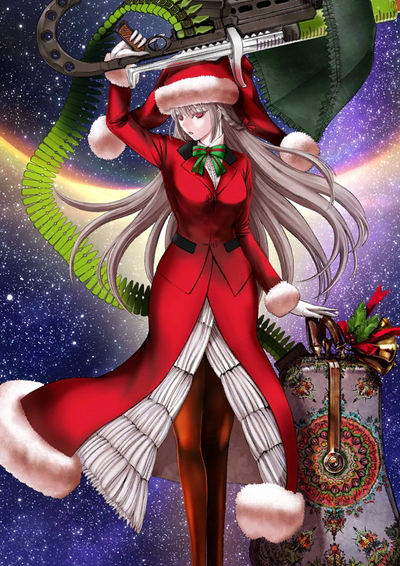 Archer is an Archer-class Servant able to be summoned by Ritsuka Fujimaru in Fate/Grand Order.

Archer's True Name is Florence Nightingale, a woman of the British Empire from the 18th~19th Century. Revered as the strongest maiden of her time, her unconditional belief was in saving people; She opposed the cruel “era” and “world” she lived in with absurdity, using the means called nursing and healthcare. Normally summoned as a Berserker, the Angel of Crimea has been summoned as an Archer Santa Servant as a result of the Christmas season, taking up a large firearm and embarking on a quest to stop the devil (Santa) from giving children cavities with gifts of candy and other sweets.

Name: Archer, Florence Nightingale, Angel of Crimea, Mercédès, The White Cloth of Steel, The Lady with the Lamp

Speed: Massively Hypersonic (Has B Rank Agility making her comparable to her Berserkr self)

Intelligence: Nightngale's intellect (And mad enhancement) is near identical to that of her Berserker self, simply focusing more on ranged methods of combat and medical treatment and being somewhat more soft spoken.

Assault Medicine: The Angel’s Arips, the Devil’s Tears: Nightingale’s spirit and will to get rid of all inadmissible pathogens and cure all the sick and wounded in need of treatment, abstracted as a Sniper Noble Phantasm. A Constantly Active Noble Phantasm, the gun-like syringe owned by Archer Nightingale injects a variety of ampoules containing drugs with different effects by shooting them like a long-range weapon. It fires at 20 shots per second. With a direct hit, the subject of the treatment will be healed in a matter of seconds. With a direct hit, the subject of the disinfection will be eradicated. We assume it takes a form similar to a gun due to influence from her military experience.

Assault Medicine Full-Burst Party: The Angel's Cry that causes Demons to Disappear from their Shadows: The Noble Phantasm of Florence Nightingale as Santa Claus, a full-force raid using Archer Nightingale’s gun-like syringe: The Noble Phantasm Assault Medicine. It gets rid of all inadmissible pathogens and cures all the sick and wounded in need of treatment instantly.