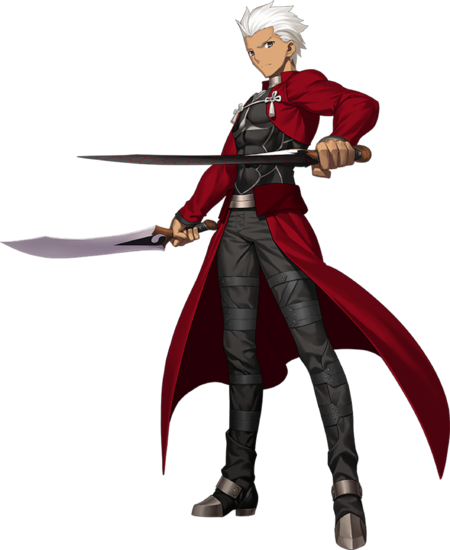 Archer is the Archer-class Servant of Rin Tohsaka during the Fifth Holy Grail War, and he is also one of many Servants able to be summoned by Ritsuka Fujimaru in the Grand Orders of Fate/Grand Order.

His real name is EMIYA. He is not a pure or proper Heroic Spirit, unlike most other Servants; he is a Counter Guardian. He made a contract with the world in his life and thus became a Heroic Spirit, dedicated to working to protect the planet. However, he steadily grew disillusioned with his ideals as he claimed countless lives to save others, becoming increasingly cynical and nihilistic.

Age: At least 37 years old (It would generally take Shirou twenty years to be able to utilize Unlimited Blade Works, something that Archer would have to have done)

Powers and Abilities: Superhuman Physical Characteristics, Magecraft, Enhanced Senses (Can make out fine details from kilometers away and snipe targets from such a distance), Precognition (Can predict his opponent's actions based on his combat experience), can reinforce objects and himself with mana, Weapon Creation, Forcefield Creation with Rho Aias, can copy any weapon he sees down to the 'soul' (barring Divine Constructs), replicating the physical abilities and fighting skill of the original wielder, Clairvoyance, limited Telekinesis (Can telekinetically move the weapons he projects, as well as any armaments inside Unlimited Blade Works), minor Spatial Manipulation (Can break into other pocket realities, such as Bounded Fields, with his arrows), Spatial Manipulation, Conceptual Manipulation and Higher-Dimensional Manipulation with Caladbolg II, Homing Attacks, Immortality and Regeneration Negation with Gáe Bolg, Harpe and likely other Noble Phantasms, Pocket Reality Manipulation with Unlimited Blade Works, Limited Conceptual Manipulation (His Holy Shroud is a conceptual weapon that protects him from the effects of the outside world, and Rho Aias is a magical defense against projectiles), Limited Power Nullification, Servant Physiology, Resistance to Corruption (As an "impure" Heroic Spirit, he's resistant to curses such as All the World's Evil)

Attack Potency: Island level (Can fight against and deflect blows from Lancer, Saber, and Caster, and shot down Illya's Degen, which broke through one of Rin's barriers), Island level+ with Triple-Linked Crane Wings (C Ranked Noble Phantasms, which are equivalent to A Ranked Noble Phantasm's), Kanshou and Bakuya: Overedge (Took off one of Berserker's lives), Caladbolg II (An A Ranked Broken Phantasm), Hrunting (An A Ranked Broken Phantasm), or Unlimited Blade Works (Unlimited Blade Works can match the Gate of Babylon. He was also able to kill Berserker six times in Fate using his many projections before falling in battle). Caladbolg II negates conventional durability by twisting space.

Speed: Massively Hypersonic (Can fight against and barely keep up with Saber and Lancer, though he's slower than both. His arrows can travel 4 kilometers in virtually no time at all)

Stamina: High. Even when separated from a Master, defeated by Shirou, and lethally injured by Gilgamesh, he was able to continue acting in the world for hours, going on to save Rin from the Grail and dealing the final blow to Gilgamesh following the latter's battle with Shirou.

Range: Extended melee range, kilometers with arrows, and Broken Phantasms (Can accurately track and fire upon targets from four kilometers away).

Standard Equipment: A Holy Shroud made from a Saint's burial cloth that acts as a first-rate Conceptual Weapon and protects him from the external world, the Tohsaka Heirloom Pendant, and his bow.

Intelligence: Archer can develop complicated plans and switch between them on the fly. Able to quickly determine the opponent’s strengths and weaknesses to shift his tactics accordingly. Technically, suppose there’s even a 1% chance of victory. In that case, he can still win due to his Eye of the Mind (True) skill, allowing him to defend himself in his second encounter with Lancer despite the latter's blatantly superior stats due to having fought him before and by deliberately leaving gaps in his attacks. Hence, he knew where Lancer would attack and could react accordingly during the Unlimited Blade Works route. He is even skilled enough to take six of Berserker's lives off before dying despite having a broken arm and without ever using Unlimited Blade Works due to being deprived of sufficient mana to use it in the Fate route. Archer is proficient in both melee and ranged combat due to his unique fighting style, being praised by Berserker for his swordsmanship and sniping other Servants from several kilometers away without issue. Also, he orchestrated the events of the Unlimited Blade Works route, successfully breaking his contract with Rin, eliminating Caster, and nearly killing Shirou, only failing due to Saber's intervention after the latter made a contract with Rin.

Weaknesses: Archer needs to be able to recite the full incantation for Unlimited Blade Works to bring it into existence as a Reality Marble. He cannot fight in Spirit form.

Unlimited Blade Works: Infinite Creation of Swords: Archer's Reality Marble, and, in effect, his Noble Phantasm. While he has no true Noble Phantasm to call his own, if a Noble Phantasm is the embodiment and symbol of a hero's legend, then Unlimited Blade Works is Archer's Noble Phantasm. It is born from his Origin and Element of "Sword," a high-class thaumaturgy that overwrites the reality around him with his inner world. Unlimited Blade Works automatically records every weapon Archer sees, analyzing their structures and storing them within his inner world. Archer can then, whenever he pleases, project them onto the world. Within Unlimited Blade Works, this is virtually effortless and instant, and Archer can even use them in a manner of Gilgamesh's Gate of Babylon, allowing him to bombard his enemies with swords shot out like arrows from a distance and all directions. However, the weapons Archer produces are ranked down. He can also project defensive constructions such as shields, but the mana cost for these is two to three times higher than if he were to create swords alone.

Using reinforcement, he can create modified variants of the weapons he projects, giving them new abilities such as creating spatial distortions or homing on his opponents seen through his versions of Caladbolg and Hrunting. By charging up his Noble Phantasms with mana, Archer can fire them from his bow as a Broken Phantasm, which provides a great increase to their power and Mystery, at the cost of destroying it on impact. While this would be a massive gamble for any other Servant, it is no issue for Archer at all, as he can project more. However, it can take up to forty seconds to charge a Broken Phantasm, depending on how much energy Archer is putting into it. 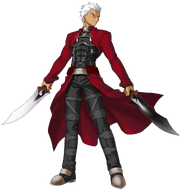 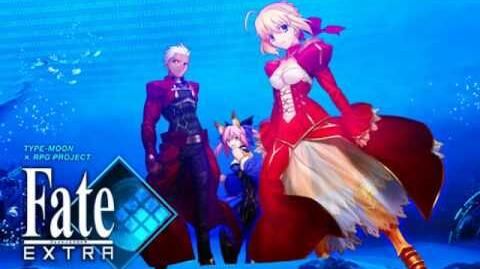 Erza Scarlet (Fairy Tail) Erza's Profile (X793 Erza was used, speed was equalized, the battle took place in a desert and they started at melee distance)

Saber (Fate/stay night) Saber's Profile (This was Fate Saber and Archer with Unlimited Blade Works. Saber was only allowed use a 7-A Excaliblast and didn't have Avalon)

Assassin (EMIYA) (Fate/Grand Order) Assassin's Profile (Base Archer was used. Combatants started 200 meters away from each other)