VS Battles Wiki
Register
Don't have an account?
Sign In
Advertisement
in: Characters, Fate, Nasuverse,
and 28 more 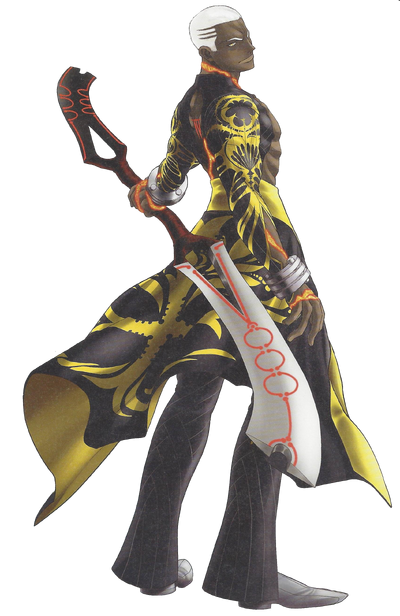 Archer is an Archer-class Servant who first appears in the Shinjuku Sub-Singularity in Fate/Grand Order: Epic of Remnant, serving as both an ally and an opponent to Chaldea.

Archer's True Name is EMIYA Alter, a version of EMIYA. Rather than a resentful, nameless hero who is doomed to an eternity of combat and slaughter, EMIYA Alter is nothing more than a heartless executor who has forsaken his memories, his past, and his name after he was forced to kill a certain Holy Woman.

Powers and Abilities: Superhuman Physical Characteristics, Magecraft, Enhanced Senses (Can make out fine details from kilometers away and snipe targets from such a distance), Statistics Amplification (Can reinforce objects and himself with mana), Weapon Creation, Power Mimicry (Can copy any weapon he sees down to the soul of its wielder barring Divine Constructs, replicating the physical abilities and fighting skill of the original wielder), Minor Spatial Manipulation (Can break into other pocket realities, such as Bounded Fields, with his arrows/bullets), Spatial Manipulation, Conceptual Manipulation and Higher-Dimensional Manipulation with Caladbolg II, Homing Attacks, Immortality and Regeneration Negation with Gáe Bolg, Harpe and likely other Noble Phantasms, Creation, Pocket Reality Manipulation with Unlimited Lost Works, Durability Negation, Attack Reflection, Limited Conceptual Manipulation (The Origin Bullets he uses for Unlimited Lost Works are considered Conceptual Armaments, and Rho Aias is a conceptual defense against projectiles), Limited Power Nullification, Servant Physiology, Resistance to Curses (As an "impure" Heroic Spirit, he's resistant to curses such as All the World's Evil) and projectiles (His Bulletproof Treatment skill grants him protection against projectiles similar to the Protection From Arrows skill)

Speed: Massively Hypersonic (He should be at least this fast as a combat-ready Servant and has battled Servants with B-Rank Agility and higher)

Stamina: High (Servants can fight for an entire day and continue for as they have mana)

Standard Equipment: Kanshou and Bakuya, modified swords that are built into handguns as bayonets and can combine into a double-bladed staff. A Thompson Contender

Intelligence: EMIYA Alter is a cold-hearted machine who thinks only of preserving the Human Order. Because of this, he pragmatically kills his foes through any means necessary, most frequently by putting a bullet between their eyes rather than facing his foes in honorable combat. His methods allowed him to outmatch the likes of Jeanne Alter. He frequently taunts his opponents in battle to agitate them and create openings and has no qualms with retreating from a poor situation. He'll also work with his enemies if it will help him achieve his ends, but will betray them just as quickly.

Weaknesses: Cannot fight in Spirit Form. Being reminded of Kiara's death can drive him insane.

Unlimited Lost Works: The Void Creation of Swords: EMIYA Alter imbues a bullet with his Reality Marble, which bears an infinite number of weapons imbued with the concept of "Sword". He then fires it at his target, causing the Reality Marble to manifest within their body, skewering and shredding them from the inside out with incredible force as an infinite number of blades spurts out from within them. These weapons have various magical properties, such as inhibiting regeneration.

Additionally, he is presumably able to utilize his Reality Marble in a manner akin to his alternate selves, allowing him to project numerous Noble Phantasms that he has encountered for his personal use after seeing them once. These copies are degraded one rank from the originals, diminishing their strength and properties, but by overloading them with mana, EMIYA Alter can fire them as one-shot Broken Phantasms that retain the strength of the originals but are destroyed upon impact. Some of The Noble Phantasms thought to reside in Unlimited Lost Works include:

EMIYA Alter at stage 4, portraying him using his reality marble