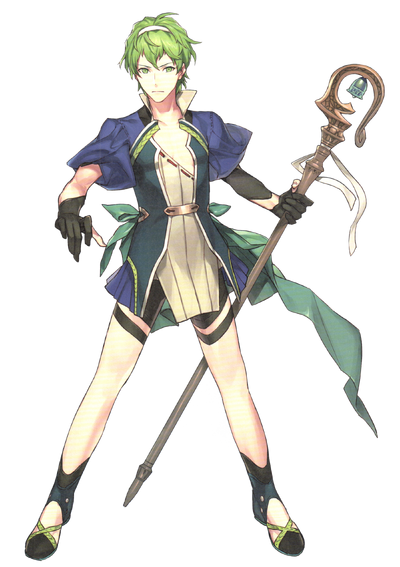 Archer is an Archer-class Servant able to be summoned by the Protagonist in the Grand Order conflicts of Fate/Grand Order.

Archer's True Name is David, the King of Israel, based on the king of ancient Israel who appears in the Old Testament. David was a shepherd and a harpist. As a shepherd, he was told by the prophet Samuel that he had been given a special role from God. He is famous for episodes such as performing with a harp in front of Saul, king of Israel, to exorcise him from an evil spirit, and defeating the Philistine giant Goliath.

Powers and Abilities: Superhuman Physical Characteristics, Expert Swordsman and Marksman, Healing (His music heals others), Blessed (Blessed by God to be able to easily kill beasts without assistance), Transmutation (Can transmute nearby rocks into the appropriate shape for Hamesh Avanim), minor Mind Manipulation and Social Influencing with Charisma, Durability Negation, Absorption and possibly Death Manipulation with The Ark, Can affect the accuracy of attacks in range of his music, Supernatural Luck, Minor Fate Manipulation (Servants with B-rank Luck or higher can change their own fates to evade inevitable outcomes such as having their hearts destroyed by Gáe Bolg), Fire Manipulation via Sacrifice, Limited Power Nullification and Servant Physiology, Resistance to Holy Manipulation and possibly Reality Warping (His Divinity grants him resistance to the Noble Phantasms related to the Messiah, including possibly the Holy Grail)

Attack Potency: Island level (Should be comparable to combat ready servants such as EMIYA. In Okeanos, he participated in the battle against Heracles, although this was more to lead him to the Ark, and shortly after fought in the final battles against Hector, Medea Lily and the Demon God Pillar Forneus), Higher with Sacrifice (As an A-Rank Anti-Army Noble Phantasm, it should be superior to a B+ Rank Noble Phantasm with the same designation), Hamesh Avanim and Ark Ignore Durability

Speed: Massively Hypersonic (Has a B-Rank in Agility, making him comparable to Saber under Rin)

Stamina: Virtually tireless while he has a sufficient amount of mana

Range: Extended melee range with his sword and staff. Several dozen meters with his sling

Intelligence: David is the most well known king of Israel, being famous for leading the Israelites to a golden era and for raising an army of over three hundred thousand. He is an excellent warrior who dispatched many foes with his sword, staff, and sling and was clever enough to dispatch of the Goliath with his own sword after knocking the giant out. Also, he is a prodigious harp player who can heal psychological ailments simply by having others hear it. In battle, he's known to be cool-headed in the face of desperation and logically thinks out his problems rather than try to escape them with brute force. However, he has a weakness for women he finds fetching and becomes far more easy to manipulate should his opponent be one.

Weaknesses: Hamesh Avanim is not immediately lethal and requires four warning shots to activate. The target of The Ark cannot be converted into spiritual form, thus David must carry it around with him. Also, his opponent must make physical contact with it for it to work and thus has to strategically guide them towards it. Has a weakness for beautiful women. Cannot fight in Spirit Form.