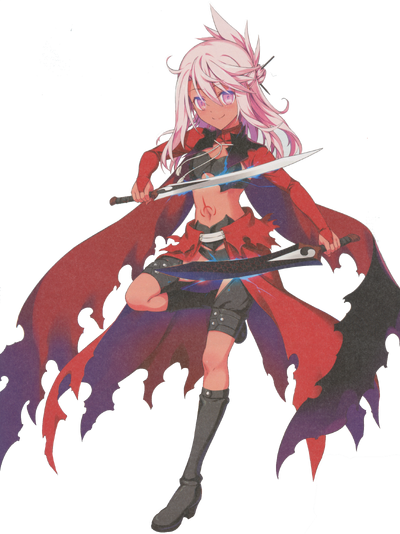 Archer is an Archer-Class Servant who first appears in the Prsima Causeway event.

Her True Name is Chloe Von Einzbern. A girl who once was a part made up of what Illya could have been, she has since separated from her and formed her own being and identity through the use of a Class Card carrying a certain nameless hero as a base. Despite not existing in the way she wanted to be, she was nonetheless accepted by those of her family and friends, becoming a part of their lives from there on out.

She appears in the world of Fate/Grand Order during an investigation of a mirror world along with Illya with Miyu, only to be separated from the former and captured along with the latter by the First Lady, even coming to be possessed and used to face off against Illya and Chaldea, who helped to free her from the First Lady's control and rescue Miyu. Though she goes back home with her friends after saying goodbyes, a part of Chloe herself stayed behind to go to Chaldea due to wondering what life was like there, allowing her to be contracted with Chaldea under Ritsuka Fujimaru and staying with them as one of many Servants to call upon during the events of the Singularities.

Powers and Abilities: Superhuman Physical Characteristics, Magecraft, Precognition (Possesses an innate sixth sense that allows her to sense and avoid danger in combat), Skilled sword user and bow user, Weapon Creation, Power Mimicry (Can replicate any weapon she sees and wield them with the skill of the original user), can reinforce objects and herself with mana using Reinforcement Magecraft, Minor Spatial Manipulation with Caladbolg III, Homing Attacks with Hrunting, nullify low-rank magic and magical contracts with Rule Breaker, Teleportation, Mana Drain (Can drain mana from others by kissing them to replenish herself), Limited Power Nullification and Servant Physiology

Attack Potency: Island level (Fought Shielder and Illya in the Prisma Causeway event, who fought Nursery Rhyme, Medea Lily, Medb, Helena, and Demon Pillar Glasya-Labolas. Later fought Blackbeard, Diarmuid, Gilles, and Phantom). Higher with Triple-Linked Crane Wings, Kanshou and Bakuya: Overedge (As a C-Rank Noble Phantasm, it is capable of producing A-Rank attacks capable of taking off one of Berserker's lives), Caladbolg III (While further deteriorated from the original as a copy of Caladbolg II, its power as a Broken Phantasm should still make it comparable to an average Noble Phantasm like Soaring Spear that Strikes with Death) and Hrunting (Stronger than Caladbolg III as an A-Rank Broken Phantasm).

Speed: Massively Hypersonic (Has B rank speed as a Servant, allowing her to keep up with most Servants of this speed. Fought Shielder and Illya, and later kept up with the likes of Diarmuid and Phantom.)

Lifting Strength: Superhuman (Should be the same as her normal counterpart)

Durability: Island level. Higher with Rho Aias (should be equal to her normal counterparts, which was durable enough to defend against a Gate of Babylon attack)

Stamina: High (Servants can fight for nearly an entire day without stopping)

Range: Melee range, higher with Thrown Kanshou and Bakuya, Kilometers with Broken Phantasms and arrows (Should be comparable to Archer)

Intelligence: Chloe is a bright and versatile fighter just like how she is back in her original world, able to utilize her projections as projectiles and use her teleportation to move behind her target instantly to perform her Triple Linked Crane Wing attack. She also possesses an Eye of the Mind (False) skill, which enables her to avoid danger as well as calmly and carefully analyze the fight before her and deduce the most appropriate, immediate action to take to achieve victory.

Retrieved from "https://vsbattles.fandom.com/wiki/Archer_(Chloe_von_Einzbern)?oldid=5721361"
Community content is available under CC-BY-SA unless otherwise noted.