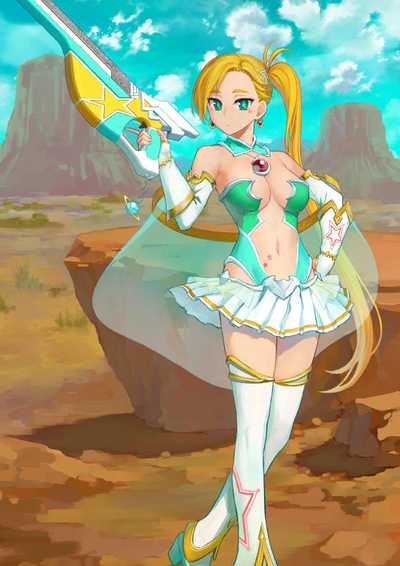 Archer is an Archer-class Servant able to be summoned by Ritsuka Fujimaru in the Grand Orders of Fate/Grand Order, first appearing as ally servant in Saber Wars II event.

Archer's true name is Calamity Jane, the Queen of the Plains who is a famous American frontierswoman and professional scout known for being an acquaintance of Wild Bill Hickok's. In the Servant Universe, she was the last remaining member of the Primodial Goddess Sealing Team, and the one who sealed Astaret Origin in the past.

Age: More than 2,000 in Servant Universe

Powers and Abilities: Superhuman Physical Characteristics, Capable Hand-to-hand Combatant, Expert Gunner, Supernatural Luck, Minor Fate Manipulation (Servants with B-rank Luck or higher can change their own fates to evade inevitable outcomes such as having their hearts destroyed by Gáe Bolg), Homing Attack (Her first Noble Phantasm always hit opponent from behind and even her normal bullets are undodgeable), Energy Projection, Extrasensory Perception and Higher-Dimensional Manipulation with her Spaceship (Regular spaceships in the Servant Universe can detect various things and freely manipulate 4-D space to an extent), Information Analysis (Knows about Tamamo Cat's wonky quantum particles just by looking at her), Sealing (Sealed Astaret Origin), Resurrection (Any servants originate from Servant Universe doesn't permanently die, and instead they respawn in different parts of the universe after an extended period of time), Statistics Reduction and Reality Warping (Her second Noble Phantasm "sees" through opponent's weakness, and solidify it as reality. It weakens to the point that Astaret Origin, a sentient galaxy, and her spiritual core was broken by someone who is as weak as Sigurd), Immortality (Type 1, 4 and 8; She is cursed to be unable to die as long as Astaret Origin isn't resurrected), Limited Power Nullification, Servant Physiology, Explosion Manipulation, Vehicular Mastery, Stealth Mastery and Invisibility, Flight with her Spaceship, Statistics Amplification, Illusion Creation (Those who die by her first Noble Phantasm hallucinate bunch of cards), Resistance to Extreme Cold (Capable of resisting the cold of Anastasia's blue gas giant, which is so cold that even sound and fragrance is frozen), Gravity Manipulation (Capable of somehow surviving near the core of the gas giant, close to the point that it almost can turn spaceships to dust), Curse Manipulation and Corruption (Type 3; Resisted part of Astaret Origin's curse, which should corrupt her soul)

Attack Potency: Island level (Has strength of a C-rank, making her comparable to Mash and Jack, also fought against Billy)

Speed: Massively Hypersonic (Kept up with Billy and barely kept up with Sigurd)

Stamina: Very high. She was able to still use her second Noble Phantasm after she had a very hard fight in Dark Ananna and got beatdown from Sigurd. She is resilient enough to take casual hit from dying Astaret Origin.

Standard Equipment: Her guns and Ananna, her ship she owns alongside Ishtar.

Intelligence: As the only survivor of Primodial Goddess Sealing Team, Calamity Jane is an exceptional fighter and Archer, one of the best of the Servant Universe. While she has zero living skills, she is exceptional when it comes to survival, scout and destructive skills, surpassing Space Ishtar at that department. She is very skilled gunner, having a same amount of level of legend as Billy the kid, with so much precision that it's stated that she never misses her target.

Weaknesses: Cannot fight in Spirit Form. She can't use her second Noble Phantasm as long as Astaret Origin isn't resurrected.

The opponent who got hit hallucinate "clover and spade's A and 8's two pairs". This technique deals the same death as her lover "King of the Plains" Wild Bill Hickok. This Noble Phantasm is also normally used in conjunction of her second Noble Phantasm, Sentinel Stellaris.

Sentinel Stellaris: Illuminate My Enemies, Polar Star: Jane's second Noble Phantasm. It is one of the "four cards" the team used to defeat the "Primodial Goddess". She will "see" the opponent's weakness and it will cement it's status as a "reality". After defeating the "Primodial Goddess", it was temporarily unusable due to her curse.

Retrieved from "https://vsbattles.fandom.com/wiki/Archer_(Calamity_Jane)?oldid=5721381"
Community content is available under CC-BY-SA unless otherwise noted.