VS Battles Wiki
Register
Don't have an account?
Sign In
Advertisement
in: Tier 6, Tier 6-C, Characters,
and 24 more 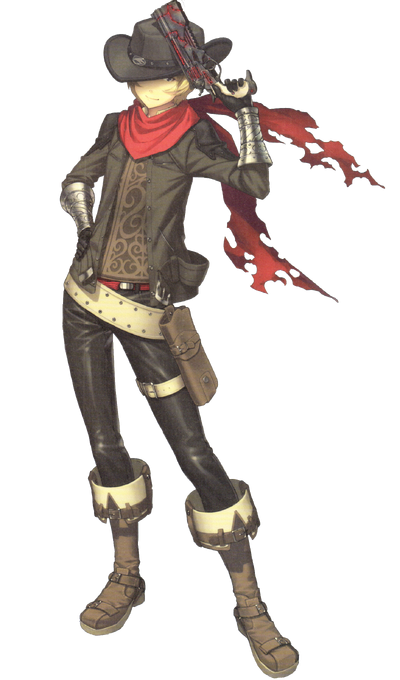 Archer is an Archer-class Servant able to be summoned by Ritsuka Fujimaru in the Grand Orders of Fate/Grand Order, first appearing as an ally-Servant in the fifth Singularity, E Pluribus Unum.

Archer's True Name is Billy the Kid. Born William Henry McCarty Junior, he is an outlaw representing the spirit of the American Wild West and he remains extremely popular even in modern times.

When he was 12-years old, the curtain raised for his life as an outlaw when he stabbed to death a man who insulted his mother. Since then, he accumulated crimes of cattle thief and robbery at the same time he took jobs of escorting goods and the likes. He was the type who would pick quarrels at random with the other outlaws whenever he was in town, but, before anyone knew, he started to have a smile plastered on his face and tried to avoid trouble.

Age: 21 at the time of death of his real-life counterpart, But seems to be summoned in his early-mid teens

Powers and Abilities: Superhuman Physical Characteristics, Expert Marksman, Precognition (Has an innate sixth sense that allows him to sense danger in combat), Time Deceleration (Thunderer slows down time for Billy's senses and surroundings to compensate for his opponent's speed. So long as he sees his enemy attack, he will always be able to fire back, and have time to spare), Total Awareness of his Surroundings, Supernatural Luck, Minor Fate Manipulation (Servants with B-rank Luck or higher can change their own fates to evade inevitable outcomes such as having their hearts destroyed by Gáe Bolg), Vehicular Mastery, Animal Manipulation, Limited Power Nullification and Servant Physiology

Speed: Massively Hypersonic (Can keep up with other Servants), higher with Thunderer (His Noble Phantasm slows down time for his surroundings and perceptions, thus increasing his combat speed to compensate for his target's speed. In addition, his quick draw skill is supposed to make it so he can always draw before his enemy attacks him with time to spare)

Durability: Island level (Is rather poorly armored for a Servant, but he managed to survive his fight with Diarmuid)

Stamina: Virtually tireless for as long as he has sufficient mana

Intelligence: Billy the Kid is one of the most legendary outlaws of the Wild West and his death was thought to have heralded the end of it. Despite being a relatively recent Heroic Spirit, he is still able to take on Servants who outstrip him entirely in terms of parameters with nothing but his wits and his famous quickdraw technique that carved his name into history in the first place.

Weaknesses: Cannot fight while in Spirit Form. Billy's Thunderer rounds can be shot down mid-flight. He lacks training in hand-to-hand combat. Even though his Noble Phantasm will always give him time to react to an opponent's actions, it does not mean he can necessarily respond to said actions. If the oncoming attack is too absolute, then he may still not be able to dodge or counter-attack in time, thus it can only work against attacks that he can actually dodge.

Thunderer: Thunderbolt of Broken Sound: The Noble Phantasm of Billy the Kid. It takes the form of his signature three shots through a Colt M1877 double action revolver (a.k.a. Thunderer), said to be his favorite gun he used when he was alive, which has sublimated into a Noble Phantasm. The range of such technique to make those shots are several times larger than what Billy could ever achieve in life. Additionally, Thunderer slows down time for Billy's senses and surroundings, and he completely grasps his opponent's location and attacks; Because of this, he will always have time to respond to an opponent's attacks and have time to counter-attack.

Strictly speaking, the Noble Phantasm is not the gun, but "this gun being fired by Billy the Kid", so it is more like a personal skill. The most unique characteristic is that a large part of this Noble Phantasm is made up of Billy's skill, rendering the prana cost equivalent to that of an E-Rank Noble Phantasm.