VS Battles Wiki
Register
Don't have an account?
Sign In
Advertisement
in: Characters, Nasuverse, Fate,
and 31 more 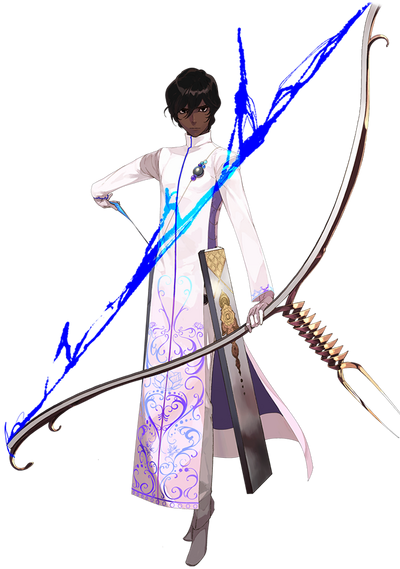 Archer is one of the Servants of the Grand Orders. He appears in E Pluribus Unum, the Fifth Singularity.

His true name is Arjuna, the protagonist of the Hindu epic Mahabharata, and the rival of Karna. If Karna is the Hero of Charity, Arjuna is the Awarded Hero, never without gifts or blessings, a truly exceptional hero with no real faults. He was the third brother of the Pandava, and was exiled from the country with his siblings as the result of his older brother losing a gamble. In the Kurukshetra War, he fought for the Pandavas against the Kauravas, ultimately killing Karna in a cowardly way similar to murder which would proceed to haunt him even after becoming a Heroic Spirit.

Powers and Abilities: Superhuman Physical Characteristics, Master Archer and Combatant, Enhanced Senses (His Clairvoyance is greater than EMIYA's, allowing him to see minute details clearly from four kilometers away and snipe moving targets from such a distance, and he can also see invisible targets), is Blessed to always receive anything he needs when he needs it, can manipulate his own sense of time, Fire Manipulation (Can imbue his attacks with fire to substantially boost their power), Death Inducement with Pashupata (Delivers Moksha to those who are judged and fail, instantly killing them), Supernatural Luck, Minor Fate Manipulation (Servants with B-rank Luck or higher can change their own fates to evade inevitable outcomes such as having their hearts destroyed by Gáe Bolg), Limited Power Nullification, Servant Physiology, Resistance to BFR

Attack Potency: Island level (Holds an A-rank strength stat, making him comparable to Heracles. Somewhat comparable to Karna and fought the latter in the E Pluribus Unum Singularity, though was losing and would have died had Cú Alter not sneak attacked Karna and interrupted their duel), Island level+ with released Gandiva (Easily repelled Geronimo's Tsago Degi Naleya with a single arrow, before killing him. Reduced an enormous forest to ash by accident with the side effects of his attacks). Low Complex Multiverse level, possibly Complex Multiverse level with Pashupata (Annihilated 28 Demon Gods at once while using its minimum range, albeit restricting the attack's range cost him his own life. As Karna's foremost rival, his Noble Phantasm should be comparable to his. Matched Karna's Vasavi Shakti during Extella Link), which also ignores conventional durability (It judges every target it hits individually, and delivers Moksha, instantly killing those who fail. It is also more effective against those who holds Divinity or has divine traits).

Speed: Massively Hypersonic (Comparable to other Servants, such as Karna and Saber).

Durability: Island level (Can fight against Karna and Scáthach)

Range: Kilometers (His sniping distance should be at least comparable to EMIYA's, who can track and fire at his targets from four kilometers away)

Intelligence: As the protagonist of the Hindu epic Mahabharata, Arjuna is an extremely skilled and powerful warrior, capable of using all manner of weapons while operating a chariot with ease. His skill with the bow is particularly notable, having surpassed every hero in the Kurukshetra War, including his older brother and rival, Karna, whose skill treads into the realm of gods. His skills in archery are so great it's as precise and accurate to the point his arrows become the equivalent of homing missiles, allowing him to easily repel bullets shot by Billy the Kid before killing him. Even in close range, where archers are at disadvantage is he able to calmly fire arrows while moving at high speeds. His great combat skill allows him to fight his older brother, Karna who is said to be a Heroic Spirit on par with King of Heroes in close range somewhat equally his disadvantage in close combat as an archer. However, having never been truly criticized for his deeds or faults, he is self-indulgent in his talents and in battle, rarely going all out from the start and often using a fraction of his power just to prolong a fight.

Weaknesses: Arjuna is arrogant, rarely going all-out from the start of a battle, instead using only ten percent of his strength so he can prolong a fight. He is also obsessed with defeating and killing Karna at any cost. Pashupata is less effective against anti-heroes.

Agni Gandiva: Flame God's Yell: Arjuna's bow, which was awarded to him by the god of fire, Agni, and is the weapon that he used to shoot down Karna in their legend. It is a bow of flames that cannot be handled by mortal hands. While it is normally just a regular bow, once he releases its true name, its arrow becomes a high-power missile coated in flames. While it is not a homing weapon, Arjuna's skill in archery is so great that it as precise and accurate as a homing weapon regardless.

Pashupata: Raised Hand of the Destruction God: Arjuna's true Noble Phantasm, a Divine Construct given to him by the god Shiva, one of the Trimurti of Hinduism, and the one who governs destruction and creation. While it is officially an Anti-Unit Noble Phantasm, that is not because it is focused on a single target, but because it judges each and every opponent caught in its range individually. Those who fail two successive checks are delivered Moksha, or liberation, instantly killing them. It has a higher chance of liberating those with Divinity, but a lower chance of liberating antiheroes.

Independent Action: The ability to remain independent and exist in the world without the magical energy supplied by a Master, allowing the Servant to act autonomously and the Master to save their own magical energy for spells. Arjuna's rank of A allows him to act without a Master except when it comes to the use of high-cost Noble Phantasms, and he can remain in the world for a week without a Master.

Magic Resistance: An innate ability that grants protection against magical effects. Unlike the Resistance effect that merely rejects Magical Energy, this ability cancels the spells altogether. Arjuna's C-rank Magic Resistance negates spells with a chant below two verses, but it cannot defend against High-Thaumaturgy and Greater Rituals.

The Awarded Hero: A skill that represents the great hero Arjuna, who was always loved and favored from the moment of his birth. As long as he is not cursed, he will never be lacking, as everyone around him will supply him with what he needs as soon as he needs it.

Clairvoyance: A skill reflecting exceptional eyesight is used for scouting areas for enemies as well as supplementing the use of ranged weapons at long distances, doubling as a must-have ability for those of the Archer Class. At higher ranks, users of this skill can even acquire other perception abilities such as future sight and the ability to see through objects. Arjuna's C+ rank allows him to keep track of and accurately fire upon moving targets from several kilometers away, and even has a chance to see invisible opponents. In addition, through extreme concentration, he can manipulate his own sense of time when firing his bow granting him the ability to make his shots even more precise at the moment he fires at his targets.

Divinity: The measure of one's Divine Spirit aptitude, reflected in high ranks by the user becoming part Divine Spirit. At A-rank, it is even an indicator as one who has reached the Throne of Gods. Additionally, it possesses another effect that allows one to reduce "Anti-Purge defense" in proportion to the rank of their Divinity, allowing them to break through defensive abilities such as Protection of the Faith and Saver's Enlightenment of the Sacred Fig. As the son of the thunder god, Indra, Arjuna has B-rank Divinity.

Mana Burst (Flames): A skill that allows for an increase in performance by infusing one's weapons and body with magical energy in the form of flames, for both defensive and offensive purposes, effectively recreating the effects of a jet burst. The skill is one that came with his bow, Agni Gandiva, allowing him to release bursts of magical energy to propel his arrows with a fiery blast, greatly increasing their power and speed. In addition he is able to create pillars of flames and bind enemies with fire.