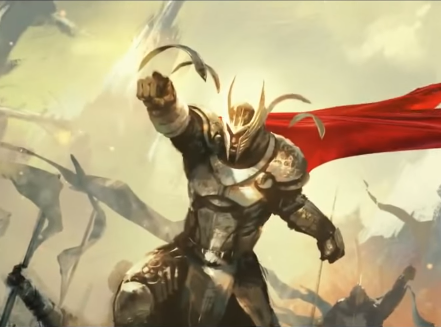 Seeing that even the twelve Empyrean Lords could not turn the tide in the battle against the Balaur, Aion created and sent the Archdaeva to Atreia to assist them.

His wings are golden in color, symbolizing true divine origin, and immense in size, symbolizing his power of being a one "True Daeva". It is possible that he represents the 'ultimate' or full potential, the culmination of power that is said to reside within every Daeva. (Source)

The player ascends to become the Archdaeva during the events of 5.0

Age: Around two-thousand years physically by the end of the Millennium War

Attack Potency: At least Small Planet level, Likely Planet level at his peak (Aion created him in response to seeing all 12 Empyrean Lords being unable to defeat the Balaur, suggesting the Archdaeva to be far more powerful than even Siel or any of the Empyrean Lords combined. Stopped the destruction of Atreia by Fregion, though this cost his life-force and he was unable to fully stop the destruction of the planet. Easily stomped the likes of Beritra, even when enhanced by Ereshkigal's Relic, which boosted his power immensely.)

Durability: At least Small Planet level, likely Planet level (Capable of trading blows with the Dragon Lords such as Beritra. Was seemingly unscathed after the events of Upheavel after a fight against Beritra.)

Range: Likely Planetary with his magic

Retrieved from "https://vsbattles.fandom.com/wiki/Archdaeva?oldid=4106800"
Community content is available under CC-BY-SA unless otherwise noted.