VS Battles Wiki
Register
Don't have an account?
Sign In
Advertisement
in: Tier 8, Tier 8-B, Unknown Tier,
and 52 more 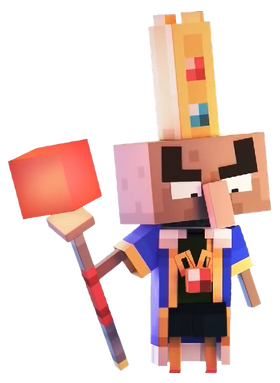 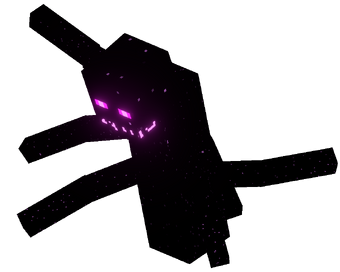 The Arch-Illager is the main antagonist of Minecraft Dungeons.

After a scouting party was slaughtered by a Hero, Archie was forced to take the blame and was hence exiled from his home amongst the Illagers. He arrived in Squid Coast and temporarily lived with them despite the initial rejection, only to have another scuffle with the same head-strong Hero, leading to him being driven out of that village as well.

Archie eventually stumbled upon a mountain cave, where he discovered the Orb of Dominance, which had beckoned him towards it since he left Squid Coast. He took it and became corrupted by it, ascending to the title of Arch-Illager and gaining immense power over his people. After a first attempt to raid Squid Coast, his army was forced to flee and Archie was captured by undead mobs, getting brought back to the Desert Temple, where he met the Nameless One. They came to an agreement to work together, where the Nameless One would provide his undead army in assisting Archie's conquest, while Archie would provide them protection from the daylight. This worked well and a little bit of extra planning, Archie was able to successfully raid Squid Coast and capture its people, causing the Hero that had caused him so much trouble to flee, although he did gain the attention of the remaining Heroes living on the island.

As the heroes made their way through the island, drawing closer to the Arch-Illager's home, Archie sought to capture the Nameless One's staff so he could summon the undead armies personally instead of relying on the skeletal necromancer. The Heroes stopped this plot however, destroying the staff as well as destroying his forge in which he created the Redstone Golems.

After being defeated within his keep, the Orb of Dominance became overwhelmed and unleashed its power, taking full control of Archie and unleashing the Heart of Ender. Once again, the Heroes had to beat him, shattering the orb in the process. The orb's shards eventually came together before flying off to different islands, creating all new threats that had to be stopped.

Name: Archie, The Arch-Illager | The Orb of Dominance | The Heart of Ender

Inorganic Physiology, Small Size (Type 2), Regeneration (High-Mid, Can drag its pieces back together after being shattered), Magic, Aura, Telepathy (Is connected to Archie, allowing the Orb to talk to his mind, read the Illager's thoughts (conscious and subconscious), and imbue his own will onto Archie, Subconsciously lured Archie to the orb's resting place from across the island), Automatic Translation, Flight (The staff can fly on its own and allow its wielder to fly), Teleportation, Mind Manipulation and Corruption, Healing (Could heal Archie's wounds and later sustain him on the brink of death), Summoning (of Illagers and Redstone Golems, Was granted summoning of undead through his partnership with the Nameless One), Clairvoyance (While placed within the Arch-Illager's throne, can display the events of other parts of the world), Telekinesis, Matter Manipulation and Fusionism (On multiple occasions fused materials to create other objects, such as fusing iron and gold to create the staff or fusing an unknown quantity of diamonds to create the mold for the Redstone Monstrosity, Carved a path into the ground to guide magma through), Creation, Energy Projection, Danmaku, Fire Manipulation, Light Manipulation, Vibration Manipulation, Electricity Manipulation, Air Manipulation, Life Manipulation (Is supposedly the only entity capable of bringing the Redstone Golems to life, Created the Jungle Abomination and other jungle enemies), Air Manipulation (Can create large gales), Weather Manipulation (Created the storm over the Howling Peaks), Coral Manipulation (Causes coral to rapidly grow and take over the Abyssal Monument), Self-Destruction, Power Bestowal (Resistance to Heat Manipulation (Made a Redstone Golem unaffected by lava), Light Manipulation and Fire Manipulation (The Orb of Dominance is capable of making entire armies of undead immune to the sunlight that would otherwise kill them), Morality Manipulation & Empathic Manipulation (Created bosses are unaffected by Wild Rage and the Love Medallion), and Gravity Manipulation (Created bosses cannot be pulled by Gravity Enchantments))

Speed: Below Average Human with Subsonic combat, reaction, and flight speed (Should still compare to other Illagers in terms of reactions despite being weak, although the Orb does strengthen him)

Lifting Strength: Possibly Class 1 (Can tear the arms off zombies) | Unknown (Could casually lift dozens if not hundreds of blocks while reconstructing the castle) | Unknown

Stamina: High (Could run across the Overworld of Minecraft Dungeon while being chased by mobs for most of it in less than a day)

Standard Equipment: None Notable | The Orb of Dominance

Weaknesses: Cannot swim | The Orb cannot read the minds of, talk to, or allow others to understand other languages as it is not connected to anyone but Archie | None Notable

Key: Archie | With Orb of Dominance | Heart of Ender