VS Battles Wiki
Register
Don't have an account?
Sign In
Advertisement
in: Tier 2, Tier 2-B, Tier 2-A,
and 179 more 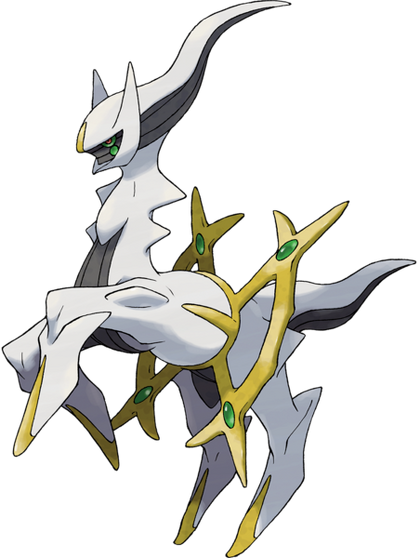 Arceus is a Mythical Pokémon who is the leader and creator of the "Creation Trio" formed by Dialga, Palkia, and Giratina, as well as the "Lake Trio" formed by Mesprit, Uxie, and Azelf, making it a Trio Master, and the only one who is that of two different trios.

By bringing the trios into existence, Arceus created and shaped the fabric of reality in the Pokémon multiverse, making it the single most powerful known entity in the franchise.

Superhuman Physical Characteristics, Immortality (Types 1, 2, 3, 7, 8 and 9), Dimensional Travel, Self-Sustenance (Types 1, 2 and 3), Social Influencing, Acrobatics, Cosmic Awareness, Nigh-Omniscience, Accelerated Development, Energy Manipulation, Energy Projection, Incorporeality, Empowerment, Enhanced Senses, Extrasensory Perception, Reality Warping, Elemental Manipulation (Can use all the powers of the 18 Pokémon Types throught its Plates, which include Fire, Water, Dark, Flying, Normal, Fighting, Grass, Dragon, Ground, Rock, Steel, Ghost, Fairy, Poison, Psychic, Electric, Ice and Bug), Creation (Can create things out of nothing, such as creating one of the members of the Creation Trio), Life Manipulation (Created the Jewel of Life from its Plates), Radiation Manipulation, Duplication and Afterimage Creation (Upscales from the move Double Team), Invulnerability and Forcefield Creation (Protected by a constant shield that protects it from invasive abilities such as Mind Attacks as well as ordinary attacks, can actively create them itself. Upscaled from Protect), Acausality (Types 1, 3 and possibly 4), Non-Physical Interaction (Attacks Incorporeals: His Omnipotent ability lets him hit all types, including Ghost), Body Control (Can separate the Plates from its body and re-absorb them back), Power Bestowal (Its Plates are the origin of all the Pokémon powers), Power Nullification (Can nullify virtually any attack, power and ability that falls under a Plate. Its Metal Barrier can negate any effect [within reason] period), Power Absorption (Can take the powers of its enemies and infuse them with the Plates), Photographic Memory, Bodily Weaponry, Precognition (Its Pokémon Conquest ability, Omnipotent, allows it to foresee and dodge incoming attacks), Can hit Selectibly intangible entities (Due to the aforementioned Omnipotent ability), Sound Manipulation (Via Hyper Voice), Vector Manipulation, Pocket Reality Manipulation, True Flight, Spaceflight, Organic Manipulation (Upscales from Snorlax), Statistics Amplification (Upscaled from Cosmic Power, Darkness Manipulation (Via Punishment), Danmaku (Judgment is depicted as a rapid downpour of dozens of bolts of energy in the games, and most of its attacks in Guardian Signs fall under this), Durability Negation (Upscaled from Perish Song), Gravity Manipulation, Earth Manipulation, Healing (Via Recover), Martial Arts (Via Seismic Toss), Time Manipulation (Future Sight allows the user to observe and attack the target in the future, bypassing Force fields and Precognition in the process), Purification (Type 3 via Refresh)

Resistance to Mind Manipulation and Telepathy (Resisted the combined telepathic technique of Sheena and her ancestor which was able to effect the Creation Trio; Significantly superior to Ghris, a man with only a small facet of it's power, who resisted Hoopa's mind control, which was able to effect the entire Creation Trio and other Mythical Pokémon at once), Space-Time Manipulation, Void Manipulation, Reality Warping, Petrification, Madness Manipulation (Type 2), Power Modification (Arceus and Silvally, who's built with an RKS [Arceus] System, are immune to Soak, which changes the type of the user), Sound Manipulation (Via Soundproof), Weather Manipulation (Upscaled from Overcoat), Fear Inducement (Via Inner Focus), Empathic Manipulation (Via Oblivious), Confusion Inducement (Via Own Tempo), Statistics Reduction (Upscaled from Clear Body), Sleep Manipulation and Dream Manipulation (Can act in its sleep, upscaled from Dialga, who could use its time abilities while unconscious, and can override Darkrai's control of the dream, Vital Spirit and Gengar), Immunity to Absolute Zero and certain status effects (The Icicle Plate turns him into an ice type, making him immune to Sheer Cold, and is immune to paralysis, poison, burns, freezing, binding, powders, and being seeded with the Zap, Toxic, Flame, Icicle, Spooky, and Meadow plate respectively), Extreme Cold and Cosmic Radiations (Completely immune to the effects of outer space)

All the powers and abilities of its avatars, including Higher-Dimensional Existence, Avatar Creation, Large Size (Type 9, possibly 10), Beyond-Dimensional Existence (Type 2. Arceus predates and created the Concepts of time and space. His True Form Exists beyond space and time, with the concepts of Space and Time being a mere extension of his being), Conceptual Creation (Type 1: Created the very concepts of Time, Space, Matter, Antimatter, Emotion, Knowledge and Willpower that shape the Pokémon World directly from its own being), Omnipresence, Abstract Existence (Type 1: Embodies the Reality that shapes all the Pokémon World), Sealing (Sealed True Form Giratina in the Distortion World), Limited Power Nullification and Immortality (Type 8: Upscales from True Form Giratina due to the nature of the Distortion World, which has the role of maintaining the balance between time and space and corrects all imbalances in the cosmology that could threaten it, which also applies to attacks), Immunity to Soul Manipulation

Attack Potency: At least Multiverse level, likely Multiverse level+ (Easily overpowered the combined might of Palkia, Dialga, and Giratina. Effortlessly recreated a Creation Trio member without any plate just to satisfy/astound Ethan and Cynthia) | At least Multiverse level, likely Multiverse level+, possibly Low Complex Multiverse level (Is the origin of the creation of everything in Pokémon, including the realms of The Creation Trio, including Giratina's which lacks both time and directions, and Palkia's which has domain over both the parallel dimensions and the directions, with the Creation Trio members also being their own realms themselves. Arceus is the "God who transcends everything" whose realm is beyond both time and space and that treats the Pokémon reality, which is made of countless to likely infinite universes, as a mere aspect of its true being, as also showcased from its consciousness extending across both space and time and Hoopa being able to forcefully summon the Creation Trio out of their realms with the "infinite power" of its rings, but being unable to do the same with Arceus', as it's the only one who could seal said power)

Speed: At least Massively FTL+, likely Infinite (Should at least be faster than Pokémon like Necrozma) | Omnipresent (Exists beyond traditional space, time and matter. Its consciousness exists all across space and time. All the Pokémon World, including the concepts that shape it like Time, Space and the Distortion World are merely aspects of Arceus)

Standard Equipment: Its Plates, which represent each of the 17 Pokémon types (Arceus does not possess a Plate representing Normal-type, as it is a Normal-type naturally) (Interestingly enough, Arceus used to possess a form [albeit an unobtainable one, likely only existing as a precaution for hacking] for the old "???" type exclusive to Curse pre Gen V, eggs pre Gen IV, and Weather Ball under the effects of Shadow Sky in Pokémon XD: Gale of Darkness). Arceus also can use the 18 Z-Crystals as they function the same way as the Plates

Intelligence: Nigh-Omniscient (Created the very concept of knowledge, in the form of Uxie, from itself. Could inform Lucas/Dawn about Darkrai during its endless sleep, while he/she was in Darkrai's nightmare). Hasn't been shown to be used to its fullest capacity, but it's highly likely the precognitive aspect of its ability "Omnipotent" is a derivative of this characteristic

Weaknesses: Depending on which Plates it is missing, it can be hindered or damaged by specific types of attacks (while missing the Earth, Meadow, Draco, Zap, and Splash Plates, Ash's Pikachu was able to momentarily hinder it with Thunderbolt) | None notable

Note 1: The entity Arceus is the physical manifestation of the Original Spirit used to interact with the Pokémon Multiverse.

Note 2: The personifications of Universal laws, Palkia, Dialga, and Giratina are stated to be, though entirely separate entities, parts of it as stated in the games and manga as are the Lake guardians.

Note 3: There has been rampant confusion over whether or not Arceus was the one who actively created the Pokémon multiverse due to a statement in the movie Arceus and the Jewel of Life. In the games, the primary canon, it is insisted that Arceus established the fundamental laws of the Multiverse, but the Creation Trio are the ones who actively formed it.

Note 4: A frequently brought up topic is the fact that Arceus was incapacitated by a simple meteor in the movie, Pokémon: Arceus and the Jewel of Life. Given his status in the series, the power of the Creation Trio, and his own feats, this scene has been dismissed as a case of PIS and should not be brought up on any thread in an attempt to downplay Arceus or downgrade its statistics.

Arceus's form and typing changes depending on what, of the 17 plates, it holds or activates at a particular time giving it invulnerability to certain attacks and a firm control over the elements.

Arceus and its children