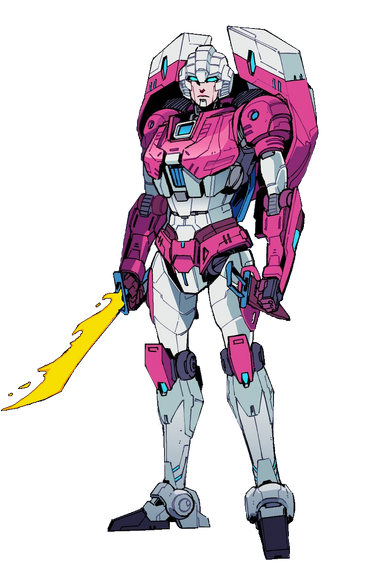 An ancient warrior from the dawn of Cybertronian history, Arcee arose from the ashes of her mysterious, traumatic past to become one of the most feared Transformers of her era and beyond. Cold and detached off the battlefield and utterly ruthless in combat, Arcee's single-minded bloodlust put her at odds with both the Autobots and Decepticons for most of the Great War.

But after finding a kindred spirit in Hardhead and making peace (or pieces) with some of her demons, Arcee has turned over a new leaf. After a brief stint in the employ of Prowl, Arcee formally joined the Autobots and struck up a friendship with Sideswipe. In her new role as one of Earth's peacekeepers, her change of spark has allowed her to grow into a more compassionate being and a capable defender of humanity.

Powers and Abilities: Superhuman Physical Characteristics, Immortality (Type 1 and 2; Cybertronians consistently shrug off wounds that should be deadly, such as bisection or even worse), Camouflage, Weapon Mastery (Can use swords and guns with extreme expertise), Stealth Mastery (Has been shown to sneak up on several characters throughout the comics), Martial Arts Master (Listed as one of the greatest Martial Arts Masters), Large Size (Type 1), Transformation (Into a Cybertronian car), Enhanced Senses, Self-Sustenance (Types 1 and 3), Acrobatics, Swordsman, Energy Projection, Afterimage Creation, Regeneration (Low, can heal from small wounds), Energy Projection, Flight, Resistances to Fire Manipulation, Ice Manipulation and Acid Manipulation

Attack Potency: Varies. At most City level to Multi-Continent level (Comparable to Galvatron)

Lifting Strength: At most Class T (Comparable to Galvatron)

Striking Strength: Varies. At most City Class to Multi-Continent Class

Durability: Varies. At most City level to Multi-Continent level

Stamina: Nigh-Limitless (Can fight and move, even with ridiculous injuries such as a severed leg, cannot tire physically)

Range: Extended Melee Range. At least Several tens of meters with her guns

Note: Due to the inconsistency of IDW, all characters have a Varies rating on their profiles due to how several writers handle the powers of the Transformers differently. Majority of IDW's top feats are consistently in the Tier 7 to Tier 6 range, and so, they are listed as such.