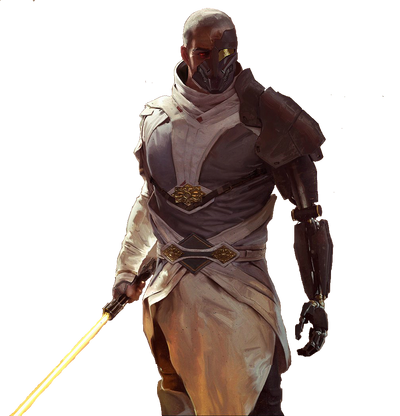 Arcann is the son of the "Immortal Emperor" Valkorion, the twin brother of Thexan and the older brother of Vaylin. He is the main antagonist of Star Wars: The Old Republic - Knights of the Fallen Empire.

In his younger years, Arcann dreamed of a grander, more exciting future than the privileged life his father gave him. With his older twin brother, Thexan, he joined the Zakuul Knights at a young age, eager to prove himself.

In an attempt to gain their father's respect, the brothers proposed a plan to test the strength of the border worlds between Zakuul and the holdings of the Republic and Sith Empire. Valkorion sanctioned the assault, but allowed only Thexan to lead the Eternal Fleet. Defying his father's orders to remain on Zakuul, Arcann joined his brother at the front. Together, they were victorious, but Arcann suffered a serious injury in battle. Valkorion's indifference to their accomplishments pushed him over the edge―he attacked his father, only to be stopped by Thexan. Despite his deep love for his brother, Arcann turned on him and murdered him. Then, he set his sights on the throne of his father.

Speed: Massively FTL+ reactions and combat speed enhanced by precognition (Fought and overwhelmed both the Hero of Tython and Lord Vitiate at once)

Lifting Strength: Peak Human, can be augmented to Superhuman levels with Force Amplification (Capable of freeing himself from a stone pillar that had fallen on him)

Durability: Wall level naturally (Lacked significant damage after being crushed by a stone pillar), Solar System level with Force Amplification (Managed to defend himself from a storm of Force energy potent enough to render the Hero of Tython unconscious. Temporarily staved off the Force Lightning used by the Hero of Tython while they had the support of Valkorion)

Range: Extended melee range with his lightsaber, likely Galactic with Force powers via scaling from entities like the Sith Emperor

Intelligence: As the son of the Emperor of the Eternal Empire, Arcann is an incredibly skilled combatant, capable of matching the Hero of Tython (A character who has defeated some of the greatest duelists in the Jedi Order) in lightsaber combat and managing to outmatch several Zakuul Knights (The Eternal Empire’s version of Jedi and Sith) since childhood, additionally, he is also a tactical genius, leading the Eternal Empire to countless victories over the Galactic Republic and Sith Empire, capturing dozens if not hundreds of planets and slaying several Jedi and Sith, however, much like his father, Arcann is rather arrogant and believes himself to be beyond destiny,