VS Battles Wiki
Register
Don't have an account?
Sign In
Advertisement
in: Characters, Game Characters, Fantasy Characters,
and 61 more 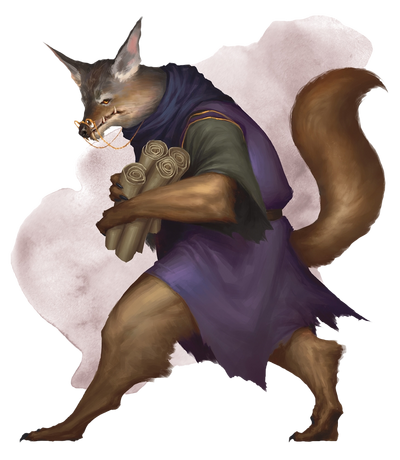 Arcanaloths are covetous, manipulative, cunning, and sly greater yugoloths originating from Oinos, the first layer of Hades. Among the yugoloths, they serve as lesser leaders and are renowned for their particular penchant for the arcane (hence their name). Arcanaloths have an in-depth sense of style that counteracts against their jackal-like appearance, which most consider off-putting; thus, most arcanaloths, if caught in negotiations, will transform into a more fitting humanoid shape, with a charming smile and glint in their eye.

Arcanaloths, much like all yugoloths, constantly seek to ascend to the next rank of their society- thus, in all of their conniving and trickery, arcanaloths seek the stepping stone to the rank of ultroloth, the faceless overlords of the yugoloths.

Age: Varies, most are many millennia old

Powers and Abilities: Superhuman Physical Characteristics, Immortality (Types 1, 4, 8, and 9; when destroyed, fiends have their essence return to their home plane, reforming in short order at full strength; Yugoloths are born again instantly after death thanks to the existence of the Towers of Gehenna; Arcanaloths need to be hit on all planes where they exist to be affected at all- they exist on 4 separate planes of existence simultaneously), Law Manipulation, Chaos Manipulation (Yugoloths contribute to the balance of Chaos and Law that makes up reality; with an upset of the balance in favor of either one, severe effects take place within reality, including delusion of the minds of those aligned with the opposite force, inexplicable deaths, etc; as neutral aligned Outsiders, Yugoloths serve as a counterbalance to both of these forces), Abstract Existence (Type 1, As Outsiders, yugoloths are purely abstract in their physiology, lacking any biology in a traditional sense), Self-Sustenance (Types 2 and 3), Non-Physical Interaction (Can affect and interact with abstract, intangible, incorporeal, conceptual, and nonexistent entities), Dimensional Travel (All Yugoloths can freely wander the Outer Planes with no hinderance), Astral Projection (Yugoloths are capable of entering the Astral Plane at will), Enhanced Senses (Yugoloths can see in infra-vision as well as darkvision), Telepathy (They can maintain telepathic communications with any sentient creature and can read their minds via detect thoughts), Extrasensory Perception (Can read magical runes, and can sense invisible creatures, Can taste emotions, can detect the presence of magic), Invisibility (Daemons can become invisibility at will), Social Influencing (Adept at manipulation to the point that devils seem honest in comparison and can manipulate large groups of people without any single individual ever knowing, and do so on a cosmic scale, manipulating entire planes of existence at once), Absorption (Yugoloths draw their strength directly from the Lower Planes, becoming invigorated by the planar power), Accelerated Development (Evolve at the same rate as Baatezu and Tanar'ri, constantly fteaccelerating to new forms of existence), Regeneration (Low-Godly, can reform from the death of their physical shell during the Purification ritual), Body Control (Can control what gender they are), Information Analysis (Most Yugoloths are exceptionally skilled at analyzing coded language, to the point that while having a normal conversation they can also have one or two extra conversations based purely on inflections and word choice of the main conversation, capable of casting identify), Corruption (Types 1 and 2; Their language, if spoken by mortals, is so potent that it may twist the person's body and soul into that of a Yugoloth), Adaptation (As a species adapted to become immune to the horrendous living conditions of the Grey Wastes, which can physically deform a creature over a brief timespan), Shapeshifting via Disguise Self, Necromancy via Animate Dead, Disease Manipulation via Cause Disease, Empathic Manipulation via Charm Person, Illusion Creation and Fear Manipulation via Phantasmal Killer and Fear, Fire Manipulation via Produce Flame and Fireball, Teleportation via Teleport Without Error and Word of Recall, Portal Creation and Summoning via Gate and Dimension Door, Transmutation (Greater Yugoloths can transform other creatures into new types of Yugoloths, altering certain aspects like strength and intelligence as a part of this process), Existence Erasure (Greater Yugoloths can destroy the essence of their inferiors with the Furnaces of Gehenna), Fusionism (Greater Yugoloths can fuse with planes of existence to reinvigorate themselves), Cosmic Awareness (By fusing with a plane of existence, Greater Yugoloths can detect the emotions and happenings of the plane itself on a universal scale), Power Nullification (The Yugoloth species removed the ability of other fiendish species to teleport, capable of casting counterspell), Absorption (Yugoloth structures can absorb body and soul), Life Manipulation (Greater Yugoloths are currently experimenting on creating new life from the souls of absorbed petitioners), Electricity Manipulation (Harnessed energy of the greater yugoloths manifests as purple electricity rippling through their structures), Perception Manipulation (The colors created by the machinations of the greater yugoloths can daze and draw in creatures), Memory Manipulation, Empathic Manipulation, Mind Manipulation (The daze generates a vision of oneself, reminding them of their failures; capable of casting Mind Blank, which reduces the intelligence of a creature to that of baseline-sentience), Memory Absorption (Arcanaloths, when slain, upload their entire memory banks to the racial memory of their entire species), Natural Weaponry via claws, fangs, and horns, Poison Manipulation (Their claws are coated in a lethal poison), Soul Manipulation and Death Manipulation via Finger of Death, Electricity Manipulation via Chain Lightning, Paralysis Inducement via Hold Person, BFR via Banishment, Clairvoyance via Contact Other Plane, Duplication via Mirror Image, Platform Creation via Tenser's Floating Disk, Forcefield Creation via Shield, Telekinesis via Mage Hand and Telekinesis, Energy Projection and Homing Attack via Magic Missile, Heat Manipulation and Metal Manipulation via Heat Metal, Plant Manipulation via Warp Wood, Darkness Manipulation via Darkness, likely many others (Arcanaloths have a varied skillset of magic, though tend to focus on destructive and protective magic over all others), Matter Manipulation via Molecular Manipulation, Flight, Extreme Resistance against Acid Manipulation, Fire Manipulation, Poison Manipulation, Biological Manipulation, Non-Magical Weaponry, Paralysis Inducement, Magic, Reality Warping, Holy Manipulation, Subjective Reality, Empathic Manipulation, Law Manipulation, Chaos Manipulation, (As seen here, here, here, here)

Attack Potency: Small City level+ (All Arcanaloths are high-end magic users, with even the weakest of them being superior to the likes of legendary dragons)

Lifting Strength: Up to Class 5 (Can push over 1 metric ton)

Range: Melee, most spells up to hundreds of meters, up to multiversal with certain spells

Intelligence: Extraordinary Genius, maintains intellect outside the bounds of possibility for a non-magically enhanced human, easily manipulates the Blood War on both sides and has done so for eons, their people share a collective knowledge of all information gathered by each member of their race, all of which are incredibly talented spellcasters of some merit