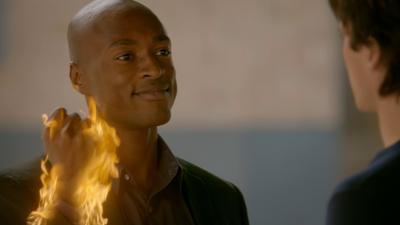 Arcadius, better known as Cade, was a recurring character and an antagonist in the eighth season of The Vampire Diaries. He was the world's first psychic who in death came to be known as the Devil and creator of Hell.

Tier: 10-B | 9-C physically, at least 9-A with Hellfire Manipulation, Unknown with other powers

Powers and Abilities: Telepathy, Mind Manipulation, Immortality (Types 1, 2 and 8), Illusion Creation, Pain Manipulation (Made Damon feel as he was stuck into Hell, Kai Parker explained that Cade would come to visit him and torture him some days and described him as torture incarnate), Memory Manipulation (Showed Stefan memories of his days as the Ripper of Monterey), Hellfire Manipulation (Has the power to generate and manipulate Hellfire wich, as stated by Sybil, stems from the fact that Hell was the psychic imprint of Cade's death, and can use it to incinerate objets and beings and kill them with a gesture or a mere thought), Biological Manipulation (Killed two men at the Mystic Grill by causing gastrointestinal bleeding), Pocket Reality Creation (Created Hell with a psychic blast), Life Manipulation and Death Manipulation, (Stated to have altered the very cycle of life and death by creating Hell), Power Bestowal and Removal (Gave immortality to Sybil and Seline, turning them into Sirens, and removed it later), Durability Negation (Via Hellfire Manipulation and other powers), Soul Manipulation (Can absorb dark souls into his dimension and feed on them, has complete control over the souls of the wicked and can force them to go to Hell after their death such as he did with Georgie. Also has the ability to release souls from Hell, upon his own volition like he did with Kai Parker), Immunity to Fire Manipulation and Heart Extraction (Demonstrated it against Damon), Resurrection (Can resurrect people like he did with Kai. Resurrected himself when the Maxwell Bell rang eleven times), Dimensional Travel (His psychic powers allow him to travel between Hell, Earth and Limbo at will even after his resurrection), Teleportation

Attack Potency: Human level | Street level physically (Beat a human Stefan with ease and made him bleed), at least Small Building level with Hellfire Manipulation (Can kill beings like vampires or sirens by incinerating them with a simple gesture or a thought), Unknown with other powers (His death made him created his own psychic dimension, which is described as worldwide by Seline and Sybil, with a unique and extremely powerful psychic blast. One of the most, if not the most powerful being in The Vampire Diaries/The Originals's verse which should make him at least comparable to Qetsiyah and Inadu)

Stamina: Average Human | Likely limitless (due to his immortality)

Weaknesses: Human weaknesses | The Mawxell Bell can interrupt his psychic powers and let him weaker by causing psychic pain to him, the dagger made of his bones is the only thing that can kill him

Start a Discussion Discussions about Arcadius/Cade