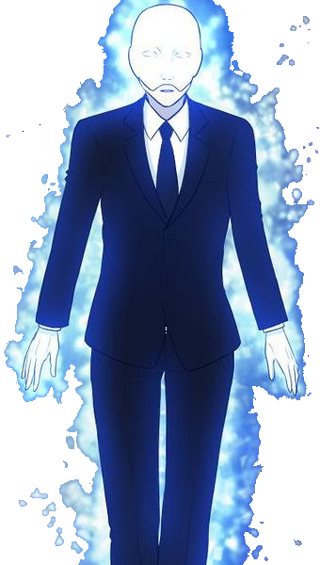 Originally known as The President, head of the Company, he desired Hwan Sung-Gon to become part of his hive-mind, so he kidnapped Seong-A, his daughter. After being stopped by Hwan Sung-Gong, Lolikiano, and Han Jee-Han, he proceeded to put his expenses into another plan, The Grand Labyrinth, an addictive video game trapping others within the game while they slept, making them believe that it was just a mere dream. The President gathered Idea energy from millions across the planet through this game and became a god through it. His current status is unknown, but as a god, his only desire is to maintain his people's faith in him, as well as uphold his principles: Revolution, Reward, and Pleasure.

Classification: Formerly: The President, God of Revolution, Reward and Pleasure

Powers and Abilities: Superhuman Physical Characteristics, likely has all The President's abilities, Dimension Creation, Immortality (Types 1, 3 and 8; As long as there are those who desire revolution, reward, or pleasure he cannot be destroyed), Regeneration (So quick that he appears to not take damage at all; At least Low-Godly, likely Mid-Godly scaling from The President), Light Manipulation, Portal Creation, Reality Warping and Power Nullification through it (Stated to warp reality to supress Gaia's will), Dream Manipulation (Can force the mind of people who play his video games into a pocket dimension in their sleep), BFR (Can force people in and out of his pocket dimension), Subjective Reality (Recreated his videogame's monsters, items, game mechanics, magic, and granted the players their in-game avatar's power. As long as enough people play, enjoy or think about a game, he can use their Idea magic to make parts of it [Like the necronomicon in Rise of Cthulhu], or the whole [The Great Labyrinth is a pocket dimension base on the moblie game of the same name] real), Power Nullification and Statistics Reduction (Made hundreds of 8-A soldiers 8-C), Forcefield Creation (around its body), Air Manipulation, Flight, Information Analysis via insight, Insight can bypass Resistance to Information Analysis, Resistance to Soul Manipulation (As an artificial god, he contains millions upon millions of souls within him)

Attack Potency: At least City level (Created a dimension that was at least city-sized. Created the Grand Labyrinth which is composed of 99 floors, the combined volume of which is city-sized or greater. Immensely superior to Hwan, and his aura alone consumed all of Hwan's power just to not be blown away by him in a few seconds), likely Mountain level (Should be comparable to Zagan and Berith), potentially Small Country level (Should be able to achieve power comparable to Amaterasu, whose corpse could make an explosion large enough to kill everyone in the Korean peninsula, through worship. This takes centuries to millennia to achieve to Amaterasu, though the amount of believers can decrease the time needed)

Durability: At least City level, likely Mountain level (Took no damage from Bora Jin's attacks, who herself is comparable to Hwan Sung-Gon), up to Small Country level over time

Stamina: Unknown, likely extremely high due to the potency of idea power, as well as his stature of being a god

Standard Equipment: None, can create object from famous videogames like the necronomicon from a Cthulhu JRPG, Toothpick and many other items.

Weaknesses: Has yet to get used to his new powers as a god. As a god, he cannot defy what he represents and will be forced to grant others wishes as long as they worked hard enough for the wish and doesn't go against what he embodies (revolution, reward, and pleasure).

Insight: Allows gods to see past the essence of matter, information and history, working as Information Analysis