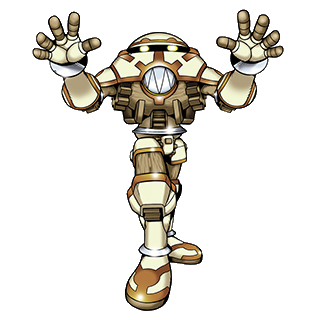 Arbormon is a Digimon that possesses power over Plant which bears the might of one of the legendary Warrior Ten. The blueprints of a medieval, wooden karakuri puppet converted into its data, so its gimmicks are surprisingly archaic. You can't tell what it's thinking due to its lack of facial expression and being taciturn, and it is usually treated literally like a puppet by its comrades, but once a battle begins, it makes sport of the enemy with its keen and tricky movements. It is able to shoot strong ivy from the tubes on its back and manipulate the opponent like a marionette. Although its skin is made to be fireproof, its internal parts and joints are vulnerable to fire.

He serves as an antagonist in Digimon Frontier, serving Cherubimon. 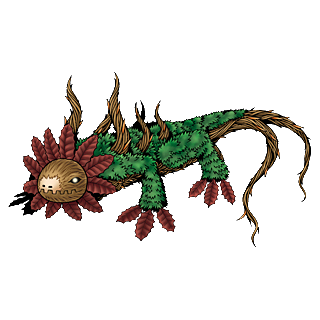 A Digimon that possesses power over Plant, which bears the might of one of the legendary Warrior Ten. Countless buds sprouted from Arbormon's surface and suddenly grew, and it changed into a form like a giant lizard with plants over its surface. Although it's just like Arbormon, where you can't tell what it's thinking due to its lack of expression, it possesses a great appetite which is the exact opposite of Arbormon, who doesn't require food. When it opens its mouth, it sticks out its ivy-like tongue and swallows anything. When it swallows its prey, the branches on its back grow and it grins eerily just at that moment. Its physical attacks are its branches and tail-whip. It scatters sleep-inducing spores from its moss, which acts as its skin.

Attack Potency: At least Island level (Can fight evenly with the other Legendary Warriors, Hybrid-level Digimon are more or less compared to Champion-level Digimon in terms of power) | At least Large Star level, possibly Multi-Solar System level (Beast-Hybrid level Digimon are often comparable or superior to Ultimates .such as Digitamamon in power. Defeated Calmaramon fairly casually)

Speed: FTL (Can hit Agunimon, who dodged a laser made of sunlight) | FTL

Lifting Strength: Superhuman (Lifts Agnimon and Wolfmon at the same time with one hand each in Episode 14) | Class 5 (Drags Blizzarmon a short distance in Episode 19)

Stamina: High. He has underwent several prolonged battles with the heroes without tiring

Intelligence: Arbormon is not a particularly intelligent Digimon, speaking slowly with a stereotypical "dumb muscle" accent and generally relies on his allies to do the thinking for him. Despite this, he has proven himself to be a legitimate threat, batting away the heroes on several occasions with his furious barrages of punches and kicks and combining them with his plant-based powers to devastate large areas very quickly. However, he's easily tricked due to his poor critical thinking, leading him to be outsmarted on several occasions.

Weaknesses: Can be lazy and is easily distracted and tricked due to his low intelligence.