VS Battles Wiki
Register
Don't have an account?
Sign In
Advertisement
in: Tier 6, Tier 6-C, Characters,
and 22 more 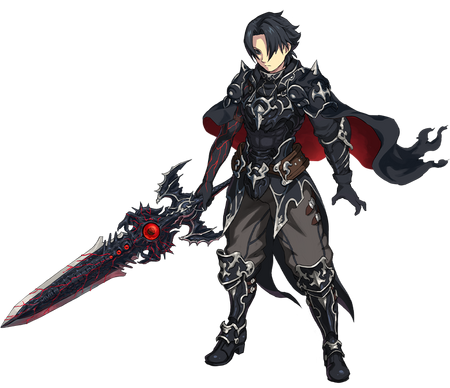 Arawin is a brother of Arthur and one of the major antagonists of Monster Strike: The Animation. Arawin is always violent as he doesn't seem to care about anyone except Arthur, In that time the sword named Caliburn chose Arthur, he got furious on why she has to be the ruler and has right to wield the sword and hated her for that even though he surpassed her in some ways. Some years later, he got tricked by a small red looking monster wearing a rode and ended up in Blade's King Domain. There were many people including Arawin tricked by that, went there, and fight for the Grimlord which is a legendary magic sword born of evil flames. He killed many people who wish to wield the Grimlord that enthrall them, Arawin wields the sword and became the Blade King who wields it.

Powers and Abilities: Superhuman Physical Characteristics, Acrobatics, Expert Swordsmanship, Hand-to-Hand Combatant, Sealing/Soul Manipulation (His sword, Grimlord could sealed beings and put them in swords), Limited Telekinesis (Grimlord has a power that controls every sword that it seals and any swords including Caliburn, doesn't do it in character), Aura, Energy Manipulation and Projection, Darkness Manipulation, Matter Manipulation (Via Grimlord, affected Arthur and possibly turned her bloodlusted with it), Danmaku, Enhanced Senses (Arawin can sense someone when it saw by Grimlord), Resistance to Mind Manipulation (His sword, Grimlord already controlled his mind)

Attack Potency: Island level (Comparable to Arthur who dissipated several clouds across the sky and causally destroyed the top of a mountain). Unknown with Grimlord (Grimlord can control every sword that has left the Blade's King Domain, can ignore conventional durability and easily sealed Vendetta with it)

Stamina: Immense (Should be comparable to Arthur who fought thousands of enemies for several days)

Intelligence: Very high (Was once better than Arthur and surpassed her many times when they were young)

Weaknesses: Very violent and full of hatred, would become useless if Grimlord got destroyed.