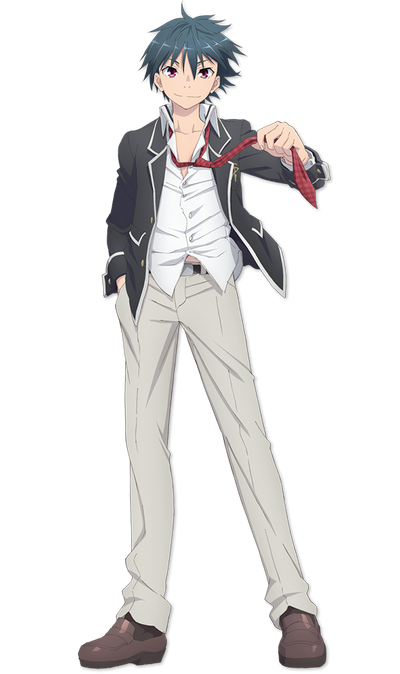 Arata Kasuga is the Magic King of the Superbia archive and main protagonist of the series, possessing the ability to nullify and copy magic. After a Breakdown Phenomenon destroys his hometown and causes his cousin Hijiri to disappear, Arata becomes determined to save her by becoming a Magus and transferring to the Royal Bibilia Academy where he fatefully meets the Trinity Seven. He usually speaks in somewhat a perverted manner and is calm in dealing with adversity. He is often referred to as the "Magic King Candidate" because only those of Magic King class mages are able to create worlds, but actually, the world he created was merely a wish that he made with the grimoire to return the world the way it was. His thema is Impel.

Powers and Abilities: Superhuman Physical Characteristics, Magic, Regeneration (At least Low-Mid; can use Akio's healing magic and survived being submersed up to the waist in a bubble of Vanitas that consumes anything it touches and erases it from existence), Anti-Magic, Telepathy, Dream-Sharing, Transmutation, Teleportation, BFR, Spatial Manipulation, Gravity Manipulation, Time Stop, Time Reversal (Can restore the state of things to what they were a few minutes ago within an area the size of an arena; this does not affect memories), Binding Magic, Energy Draining, Energy Projection via Mantra Enchantment and Outer Alchemic, Possession, Can travel between dimensions, Can analyze, deconstruct, and copy other people's magic, Can combine different spells together using Judecca, Can manipulate and destroy matter at the atomic or subatomic level through Outer Alchemic and Breakdown Phenomena

Attack Potency: Large Island level (Abyss Trinity can casually create an explosion with a blast radius of 100km when sealed and at less than half power, Arata should be stronger than him) | Planet level (He exceeded the power of a Trinity which is Abyss' at full power which is stated to be explicitly designed to destroy the world, also destroyed a pocket dimension with ease)

Speed: FTL via power-scaling | At least FTL (Was capable of disappearing from even Lugh's sight after obtaining Judecca and gaining the powers of a true Magic King also decimated a golem before any of the other members of the Trinity Seven could react).

Stamina: Unknown (Without the Magic King Element, even attempting to steal their power will consume you with inside. The only reason why Liese survived was because an actual Magic King saved her.)

Intelligence: Prior to realizing his powers, Arata was a rather ordinary and carefree teenager who rarely took things seriously. Nevertheless, his Magic King Element has made him a magical prodigy, and he quickly masters the magics of the Trinity Seven, whom are all prodigies in their own right within months of become a Magus, Nigh-Omniscience with Judecca (Is granted knowledge of everything and everyone in his immediate vicinity)

Weaknesses: If his Magic King Element is removed, he'll die. He risks becoming Astral Trinity permanently should he overuse Trinity Form, limiting his time in the state. Is rather laid-back and a pervert and he is single-mindedly driven to save his cousin Hijiri, a fact that can be used to manipulate him.

Superbia - Imperium: Arata's Thema is Imperium or "Rule", meaning that his magic is used to dominate and "rule" others. Arata's primary magical ability is dispelling other magic, often with the result of stripping any nearby victim's magically-generated clothes, thus earning it the nickname of "Stripping Magic". This magic is also capable of easily dispersing Breakdown Phenomenons. Recently, he has learned to adjust the level to avoid stripping away clothes. As a Magic King Candidate, as well as from possessing the Astil Manuscript and later the Ilias Fragment, Arata is awarded numerous powerful abilities. One of which is the ability to copy other Magus' magic, even those from different Archives and Themas. Simply put his grimoires rearranges another magic into something Arata can use. This process to copy another's magic has three steps:

When all three steps are completed, Arata is then able to use that magic with his own twist. Currently, he has copied three different users' magic.

Note: Although it is not listed here, Arata should be capable of replicating the magic of anyone whose spells he has analyzed and disassembled, such as Abyss Trinity and the other members of the Trinity Seven. His nature as a Magic King Candidate also means that he would be able to rewrite the laws of the world at his whim should he reach his full potential.