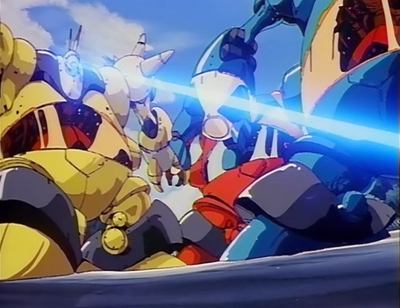 The Arashiyama Five are a group of five giant robots that appear in the anime film Project A-ko. These bulky mechanoids were built by spoilt heiress Biko Daitokuji for the sole purpose of killing her high-school rival Eiko Magami, all so Biko could have Shiiko Kotobuki as her friend. The Arashiyama Five all shared the same physical structure, though they each came in a different colour: blue, green, yellow, red and white. They fought using their sheer size and brute strength and could also fire lasers from their optic lenses.

Attack Potency: At least Building level (via sheer size and should be superior to the Max 5000[1])

Range: At least tens of meters

Retrieved from "https://vsbattles.fandom.com/wiki/Arashiyama_Five?oldid=5986990"
Community content is available under CC-BY-SA unless otherwise noted.