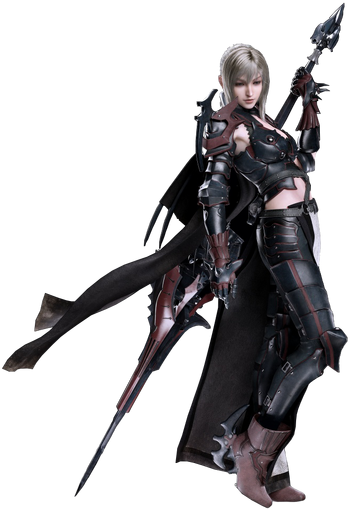 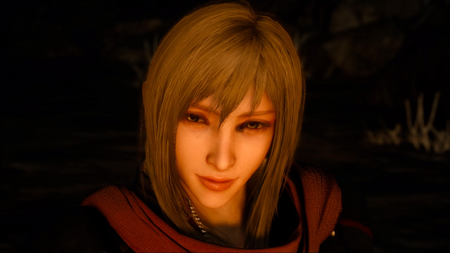 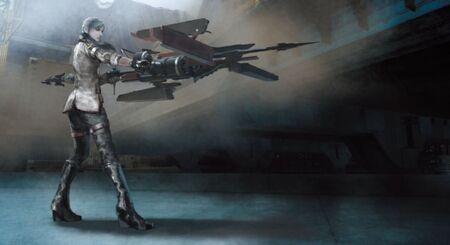 Aranea Highwind is a boss and a guest party member in Final Fantasy XV. She is a mercenary who serves as the commodore of the Niflheim Empire's Third Army Corps 87th Airborne Unit. Her skill in aerial combat and wielding of a lance makes her akin to a Dragoon, a traditional job class from the Final Fantasy series.

Aranea is a hard-edged and free-spirited former mercenary whose loyalty and motivations are ambiguous. While she ranks high within the empire, she is unafraid to speak about her distrust of other high ranking officials. Despite her status, she addresses others in a casual manner and is rather mischievous. She chooses her own path and encourages others to do the same.

Age: 30 years old in FF XV, 40 years old Post-Timeskip and in Dawn of the Future

Powers and Abilities: Superhuman Physical Characteristics, Master Combattant, Weapon Mastery, Limited Flight (Can use her spear to fight airborn and uses jump attacks in combat), Energy Projection (Via her Stoss Spear), Vehicular Mastery, Stealth Mastery, Electricity Manipulation (Uses a a new magitek weapon that can open up to shoot electricity by the time of Dawn of the Future), Darkness Manipulation as a daemon

Attack Potency: At least Country level, possibly Multi-Continent level (Fought Pre-Timeskip Noctis and his friends at the same time on equal terms when they infiltrated an Imperial base and later helped them in fighting daemons and Quetzalcoatl. Helped Prompto defeating Barbarus. Destroyed one of the Diamond Weapons in Gralea by destroying its core) | Multi-Continent level (Spent the last decade hunting daemons along Cor Leonis and became comparable to him. Was able to fight Revived Lunafreya as a daemon and later helped Noctis and his allies fighting the army of Bahamut's clones with Biggs and Wedge)

Intelligence: Gifted. Aranea is an extremely skilled fighter and an experienced mercenary who is perfectly able to fight very powerful opponents like Noctis on equal terms, her record indicating she is more than capable of fighting daemons. Her fighting style makes her a particularly competent and dangerous enemy, always keeping the higher ground with her foes. In addition to that, she is also very proficient with different kind of vehicles and a good tactician and hunter.

Weaknesses: Is harmed by the light as a daemon, otherwise none notable.

Retrieved from "https://vsbattles.fandom.com/wiki/Aranea_Highwind?oldid=5269325"
Community content is available under CC-BY-SA unless otherwise noted.