VS Battles Wiki
Register
Don't have an account?
Sign In
Advertisement
in: Tier 7, Tier High 7-C, Tier 6,
and 62 more 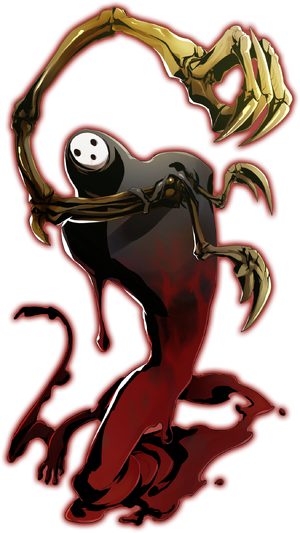 Arakune, known as a human as Lotte Carmine and nicknamed as Roy, is a former scientist for the 7th Agency, who turned into a grotesque monster with an obsession for the Blue. He is a playable character in the BlazBlue series.

Superhuman Physical Characteristics, Self-Sustenance (Type 1, 2 and 3; Lacks the need for sustenance due to being a being made of seithr), Stealth Mastery, Alchemy User, Regeneration (High-Mid due to his liquid body, High-Godly with Self-Observation; Scaling from Terumi who can come back from Time Killer, which is superior to the Cauldron's Existance Erasure, which can erase someone from the past, present, and future), Immortality (Type 1, 3 and 9; His soul exist in the boundary and Arakune is just a temporary body to exist in the timeline), Natural Weaponry, Acausality (Type 1; Thanks to the EWI, he's unaffected by the effects from a Phenomena Intervention, which can reset an entire timeline), Psychometry (Alchemists are capable of gathering information on their surroundings as shown in Xblaze), Status Effect Inducement (Can slow down people with webs), Teleportation (via If P then Q), Invulnerability (Is a being that exist outside of Logic; the fundamental rules of the world; meaning any abilities/weapons/and powers that are restrained by Logic cannot harm them), Shapeshifting (Can change the shape of his body), Inorganic Physiology (Type 1), Phenomena Intervention (Arakune's real self; Roy, is capable of creating Phenomena Interventions), Energy Projection, Cloud Manipulation (Can make a toxic cloud to inflict upon his foes), Technology Manipulation (Seithr itself is capable of messing with the technology of the NOL and sector seven), Non-Physical Interaction (Can hit Izanami), Intangibility (Is made of liquid Seithr), Curse Manipulation (Can inflict foes with a curse to be assaulted by insects), Insect Manipulation, Summoning, Invisibility (Can cloak itself), Life Manipulation (Is Seithr itself, which can give a seed life and sentience), Extrasensory Perception (Capable of sensing souls, life and Azure), Clairvoyance (Scaling from Litchi who can see future by blackouts), Poison Manipulation, Madness Manipulation, Biological Manipulation and Statistics Reduction (Is made of seithr, which is poisonous, can induce addiction and deteriorate bodies, as well as the power of others), Statistics Amplification (Scaling from Litchi who can draw power from boundary), BFR (Sent Litchi into the boundary when he absorbed her), Telepathy (Can read memories of the people he absorbs), Memory Manipulation (Consumed Litchi's memories), Resurrection (Like Terumi, he is capable of observing himself), Absorption (Can absorb the seithr around him, as well as absorb others including souls), Power Absorption (Can absorb techniques, experiences and powers), Regeneration Negation (Up to High-Godly; is able to utilize Ars Magus, a weapon capable of killing the Black Beast, a creature that has the ability of Self Observation, which is what Terumi used to regenerate from Hakumen's Time Killer), Shockwave Generation (Capable of blowing people away by bursting)

Attack Potency: Large Town level+ (Gave Tager some serious trouble) | Small Country level+ (Can keep up with CP Kagura and Ragna) | At least Small Country level+, possibly Large Planet level (Stronger than before. Comparable to the likes of Bang and kept up with a depowered CF Ragna, is also able to become another Black Beast with sufficient amount of Seithr absorbed into him)

Lifting Strength: Class 5 (Able to lift himself who can be 1000 kg and is comparable to Tager) | Class T | Class T

Stamina: High. Able to fight while having his body, mind and soul sucked into the Boundary.

Range: Tens of Meters normally, higher with curse and beam, Low Complex Multiversal with BFR (Can send someone into the Boundary when he consumes them)

Weaknesses: He gets slowly sucked into the boundary as the time continues, however this is not combat applicable given how long it took for him to be completely consumed. 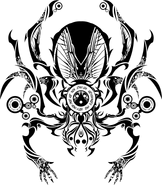 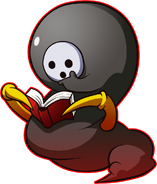