VS Battles Wiki
Register
Don't have an account?
Sign In
in: Me, a Genius? I Was Reborn into Another World and I Think They've Got the Wrong Idea!, Characters, Male Characters,
and 14 more 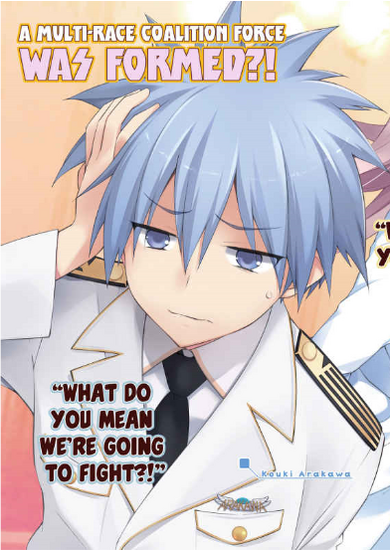 Arakawa Kouki is the main protagonist of Me, a Genius? I Was Reborn into Another World and I Think They've Got the Wrong Idea!. He was a former researcher who died when riding back home on his motorcycle.

Origin: Me, a Genius? I Was Reborn into Another World and I Think They've Got the Wrong Idea!

Powers and Abilities: Genius Intelligence | Same as before plus Superhuman Physical Characteristics, Enhanced Senses (His suit is equipped with radar), Black Hole Creation, Social Influencing (Kouki's charisma makes it so that he just has to spend a little time with people, and they want to be on his side), Stealth Mastery (His suit is equipped with optical camouflage), Weapon Mastery, Resistance to Heat Manipulation (Powered suits are capable of withstanding temperatures of up to 10,000°C for a moment or two, assuming its cooler is operating correctly)

Durability: Human level | At least Small Building level (Far superior to 8th generation powered suits that can tank a direct hit from a missile, and withstand even a shot from a main battle tank and anti-tank mines)

Intelligence: Extraordinary Genius (At age 4 he constructed and completed the theory of Mother’s Equation, which completely proved that other worlds existed in other time points. At age 5 he designed a new type of fusion reactor. At age 6 he completed a design for a next-generation powered suit. Around the same time, he improved orbital satellite cannons. At age 7 he began production of medical pods. Around the same time, he developed a new model of fighter jet with variable wings. At age 10 he completed production of a new model of the medical pod. In June of the same year, the United Nations forces were mobilized when he experimented by releasing a chemical weapon he made using nothing but commercially available chemicals typically found at hardware stores, into the garden of his home. At age 11 he improved fifth-generation main battle tanks and conceived of quasi-sixth-generation tanks. In March of the same year, he experimented by adding an antibacterial product to a public pool. The Ground Self-Defense Force was mobilized. At age 12 in February, he launched a cruise missile disguised as a firework from the coast. This was successfully intercepted by submarines of the Maritime Self-Defense Force. In August of the same year, he experimented by launching an improved cruise missile, which the Maritime Self-Defense Force and Air Self-Defense Force failed to intercept. The missile self-destructed 40 km off the coast. At age 13 in January, July, and November, he launched into orbit three satellite rockets disguised as fireworks from the garden of his home at night. In November, the United Nations Space Force used all of their resources to track these rockets; however, the targets were lost. At age 14 he developed an anti-cancer medical pod. A small number of experimental units were made available to civilians. At age 15 in January, he experimented by operating a prototype military-use sixth-generation powered suit in the garden of his home. He caused an unmanned drone to collide with a missile falling twenty times the speed of sound, something that humankind had only just been capable of with the help of technology. Created an artificial black hole. Has enough talent to be a first rate soldier)

Weaknesses: Only has a single imaginary number bomb. Completely oblivious to his own genius, instead thinking of instances of him performing feats of genius, as coincidences.