Arael is the Fifteenth Angel.

Age: 15 years old (Arael's soul was deposited into a physical body immediately after the events of "Second Impact" on 13th September 2000 A.D.)

Powers and Abilities: Superhuman Physical Characteristics, Self-Sustenance (Type 3), Enhanced Senses, A.T. Fields (Can be used both defensively and offensively, such as in the form of optic blasts), Flight, Mind Manipulation / Telepathy, Energy Projection, Regeneration (High-Low, Low-High over time; should be able to regenerate from its core alone), Resistance to Cold and Radiations

Attack Potency: Unknown (Does not focus on physical destruction), can ignore conventional durability through its Mind Attack Beam (By combing through a target's memories and mind, Arael causes major mental trauma)

Speed: Unknown (Arael spent the entire duration of its appearance in low-Earth orbit, and is completely stationary). Speed of Light attack speed via Mind Attack Beam (Arael projects it as a ray of light)

Intelligence: Arael appears to be intelligent enough to possibly pass off as "sentient": while it is never implied, there is a possibility that the "child Asuka" present during the actual Asuka's mind attack was in fact the "Angel of Birds" attempt at communication (and it is well documented that Angel-human communications are similarly traumatic and surreal for the latter individuals). The "Mind Attack" beam also demonstrates the efficiency and effectiveness of Arael's "offense": never requiring to make physical contact with Earth and risking its life against the Evangelion Units.

Weaknesses: The "core" of an Angel, once breached, means absolute certainty of death for the Angel involved.

- A.T. Field (A.T. = Absolute Terror): The intangible light of the soul in the physical world, A.T. Fields are possessed by all living beings on NGE-Earth and are one of the major aspects of the human psyche that defines someone as "individual" and "protect" them from the intrusion of another's feelings. However, the Evangelion Units and the Angels are unique in the ability to generate A.T. Fields that are corporeal and occasionally visible to the naked eye, possibly due to the large amount of innate energy contained in their souls. Their A.T. Fields mostly function as a physical defense: a forcefield consisting of concentric octagonal yellow lines. The barrier is almost perfect, only being temporarily disrupted from its active state by incredibly energetic weapons (such as military-grade positron beams and "N² Weapons") or erosion by another corporeal "A.T. Field" that is superior in strength. If left alone after initial disruption, the A.T. Field will revive its durability almost instantly as long as the user is still alive, making it a regenerative barrier. The transition from a dormant A.T. Field to an active Field is indicated by a slight atmospheric blurring.

- Mind Attack Beam: Arael's primary form of "offense" is to project a beam of light from its body and shine it down on the opponent, forcibly probing their minds and recollecting painful or traumatic events from their memories, incapacitating the opponent in the horror of recollection (or even rendering them comatose, as what happens to Asuka in the manga-version of the fight). This may in fact be a bizarre and excessively ruthless attempt of "communication" with foreign species on the part of Arael, considering its siblings' similar track-records at Angel-to-human "conversation" and the presence of a "child Asuka" constantly talking to the "real" Asuka in the sequences, though this has yet to be confirmed. Strangely enough, the light projection appears to be accompanied by a chorus of Hallelujah, which makes the whole experience even more surreal and more terrifying.

- Regeneration: Arael possesses the ability to recover or revive lost portions of its body. While it does not demonstrate the ability against the Evangelion Units (as the "core" is the single organ that cannot be reconstructed, for obvious reasons), the "S² Engine" contained within the "core" automatically allows for regeneration. 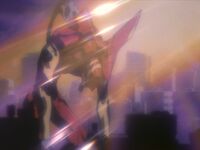 The beam of light that Arael casts upon "Eva-02"

Retrieved from "https://vsbattles.fandom.com/wiki/Arael?oldid=4877157"
Community content is available under CC-BY-SA unless otherwise noted.