VS Battles Wiki
Register
Don't have an account?
Sign In
Advertisement
in: Tier 9, Tier 9-A, Tier 8,
and 41 more 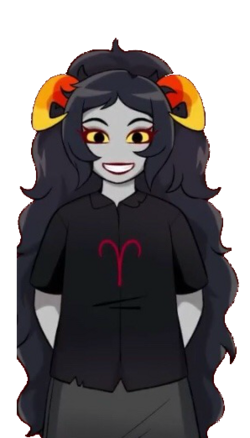 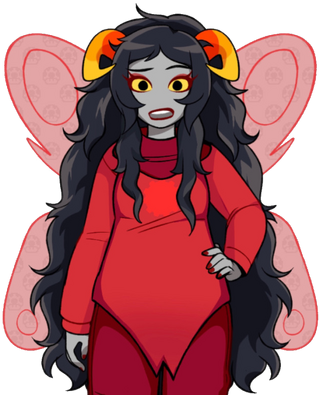 Aradia Megido, also known by her screen name apocalypseArisen is one of the trolls in Homestuck. Her associated Zodiac sign is Aries, Initially a ghost following her murder by Vriska, she later becomes a Sprite, and then a robot. She is instrumental in the defeat of the Black King due to her abuse of time travel to make hundreds of duplicates of herself. Later, when Jack Noir destroys the Troll's Derse, her dream self dies on her Quest Bed and she becomes a God Tier.

All previous powers to a greater extent, Accelerated Development (God Tiers still level up through the echeladder, but also gain small powers known as "badges" over time, usually allowing to bypass one of Homestuck's rules) Time Manipulation and travel, Soul Manipulation, limited Mind and Plot Manipulation, Immortality (Types 1, 4, and 8; can't die if her death isn't "Just" or "Heroic"), Resurrection, likely Beyond-Dimensional Existence (Type 2) and Acausality (Type 5. Isn't bound by the infinite hierarchy of meta-rivers, which are litteral fates, causality and plots)

Attack Potency: Small Building level (Destroyed part of a temple effortlessly. Comparable to the other base characters) | Building level+, likely Multi-City Block level (Able to throw meteors similar to the one cut by Bro Strider, killed Vriska and stated to be able to snap Vriska's neck even as a god tier. As a powerful psychic, she shouldn't be anywhere below Sollux Captor. Slapped around Equius like a ragdoll) | Multiverse level+ (Could hold Bec Noir back with ease. Should be comparable to others god tiers such as Dave Strider), likely Outerverse level (Became familiar with the fabric of the Furthest Ring, being able to casually masters its time. Stated that her power extended to the entire narrative and was going to go out of Canon through her own power, something even characters who reached the "full light of Reality", above the Furthest Ring, can't do. She also was stated to have ascended to "another plane of reality" by WoG)

Weaknesses: Lacks many powers useful for combat situations, Overly Cryptic | Lost a significant amount of joy after becoming a robot | None notable