VS Battles Wiki
Register
Don't have an account?
Sign In
Advertisement
in: Characters, Female Characters, Villains,
and 20 more 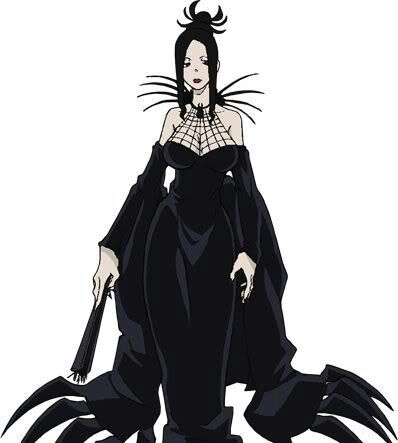 Arachn Gorgon is the older sister of Medusa Gorgon and the leader of Arachnophobia. 800 years ago, she killed a fellow Witch in order to fuse it with a weapon to create the first Demon Weapon. This act of heresy had brought her the ire of both the witches and Lord Death, forcing her to seal herself in a golem to avoid death.

Many years later, the Madness Wavelength of the Kishin Asura had managed to wake her up and to take up a physical form again, regaining the control of her organization. Immediately after her awakening, she set off to wage war on the DWMA and to take control of Asura himself.

Powers and Abilities: Superhuman Physical Characteristics, Magic, Shapeshifting, Animal Manipulation (Can transform into and control an innumerable amount of spiders, and she can see the world through every single ones of them), Power Nullification (Can completely paralyze people with her webs), Possession (Can possess beings if she was to die), Immortality (Type 2 and 6), Soul Manipulation (Spread her own soul over the entire castle. Infected the soul of her entire organization), Mind Manipulation, Madness Manipulation (Can control and drive insane both her entire organization and large parts of the DWMA. Instantly incapacitated Medusa using it), Technology Manipulation (Can jam electronics), Incorporeality (Managed to become nothing more than a pure mass of madness, unable to be hurt by normal attacks), Absorption (Planned to absorb the Kishin into herself)

Intelligence: Gifted. She managed to gather an immense organization with an almost religious dedication to her.

Weaknesses: She lacks a bit of her usual firepower in her Non-Corporeal form. Her own Madness Wavelength can be used against her.