VS Battles Wiki
Register
Don't have an account?
Sign In
Advertisement
in: Tier 7, Tier 7-A, Tier 4,
and 48 more 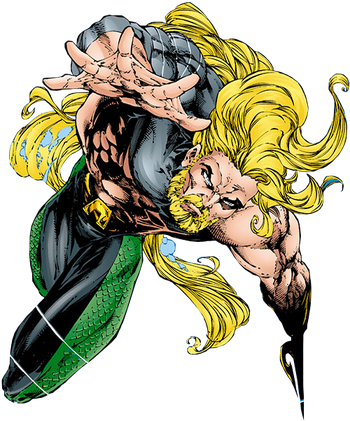 Aquaman is the ruler of Atlantis and the Earth's oceans, an Atlantean with incredible strength and speed as well as the ability to command all sea-life. His unique physiology allows him to survive on land and at the ocean's greatest depths of pressure and temperature. Given the names Orin through his royal heritage and Arthur Curry by his human upbringing, he fights to protect both worlds using his mighty abilities and political influence. He is a founding member of the Justice League of America.

Powers and Abilities: Superhuman Physical Characteristics, Self-Sustenance (Type 1. Can breathe underwater and survive in space), Stealth Mastery (Has performed infiltration with a camouflage suit), Master of various melee weapons, Martial Arts (One of the most skilled Atlanteans in hand-to-hand combat), Water Manipulation, Energy Projection, and Weather Manipulation with The Trident of Neptune, Mind Manipulation (Able to tap into The Clear, which grants him a variety of telepathic abilities. This includes telepathic communication with and control over any animal that has originated from the sea. This includes inducing seizures, breaking/destroying someone's mind, and even almost removing alternate personalities. It also works on an AI and the undead), Can summon various sea-creatures, Pseudo-Precognition (Can use his telepathy to predict attacks), Enhanced Senses (Sight, smell, hearing. Can also use his telepathy as a source of vision), Memory Manipulation (Made an enemy forget he attacked them. Removed nearly all of The Shark's memories when he devolved him into a regular shark), Biological Manipulation (Regressed a sentient humanoid shark back into a regular shark), Fear Manipulation (Caused Kordax so much fear that he ended his own life and made every animal on the planet experience his fear), Psychometry (Can telepathically trace the origin of objects), Perception Manipulation (Made sharks attacking a fish look like a man committing suicide). His Hook Hand can channel electricity through it, Resist electrical and energy attacks. The Waterbearer Hand grans him Enhanced Water Manipulation, Ice Manipulation (Can turn the liquid hand into ice), Power Nullification (It negates and deconstructs magical enchantments, spells, and items/creatures), Regeneration (High-Low. Brought him back from the brink of death), Healing (Can heal others of physical wounds, mental ailments, and even resurrect the recently killed), Teleportation to the secret sea, Control over the hand's shape and density (Can even send it into machines and a man's head), Precognition (Can receive visions of the future), Extrasensory Perception (Can perceive spirituality in water), Portal Creation/Dimensional Travel (Creates portals to different realities), and purify water. His liquid metal hand can shapeshift into whatever shape he wills it. As the elemental of water, Arthur gains much more extensive Water Manipulation alongside Logia-Intangibility, and Shapeshifting. Resistance to Mind Manipulation (Has broken out of and resisted the attacks of other Telepaths), Fear Manipulation (Broke out of Shark's induced fear), Pain Manipulation (Ignored pain that could immobilize Ocean Man), Extreme Temperatures (Claimed he could withstand most temperature extremes. Survived being frozen in ice), and Extreme Pressure (Survives pressures at the bottom of the sea)

Attack Potency: At least Mountain level+ (Could part the water of the ocean and create a number of Tsunamis with waves as tall as high-rise buildings, engulfing a city, which should have taken far more energy than notably large Tsunamis in history), at most Solar System level (Sometimes portrayed with a level of power that could let him knock out, trade blows, and restrain Superboy in combat, injure Despero, and even fight on-par with a number of the stronger members of the Justice League. Overpowered Yellow Lantern Nero's constructs which were capable of damaging a non holding back Justice League), his powers can ignore durability

Speed: At least Hypersonic travel speed (Traveled 10,000 feet in a second. Can swim faster than torpedoes), with at least Relativistic+ combat and reaction speed (Reacted to lasers a number of times), at most Massively FTL+ (Has dodged attacks from Despero and kept up with a number of prominent Justice League members on occasion)

Lifting Strength: At least Class M (Has supported the weight of skyscrapers/buildings several times) physically, Class T with Water Manipulation (Has frequently moved around enough water to cause large Tsunamis)

Durability: At least Mountain level+ (Could trade blows with an evil version of himself, take blasts from Poseidon's Trident, and has frequently fought characters comparable to him), at most Solar System level (Sometimes portrayed as durable enough to take hits from prominent members of the Justice League, survive a direct blast from Starro)

Stamina: Superhuman. Can use his powers to their full extent for an hour before becoming weakened outside of the ocean, and doesn't strain himself while applying his powers when he has access to water or is in the ocean. Fought against various enemies for lengthy periods of time, usually for a number of hours above the surface before becoming weakened and far higher while in water

Range: Extended Melee Range with his Hook Arm and Trident, Several kilometers with most powers (Can cause storms and tidal waves drawn from miles away), potentially Planetary with telepathy (Can effect every being on Earth with his powers)

Intelligence: Genius. Deceptively intelligent. Managed to hack into and re-create the entire Justice League database, and operates as a military and political leader for a national power. Charismatic enough to sway large crowds of people and even end conflict between armies in the middle of a battle

Standard Equipment: Typically either has The Trident of Poseidon, His Hook-Hand, The Waterbearer Hand, or his Liquid Metal Hand

Weaknesses: Being without water for over an hour can weaken and eventually kill him, although the Waterbearer hand negates this, and he can even hydrate with blood if absolutely necessary. Prefers not to use his telepathy to directly control others, usually only using it to its full potential when pressed into a corner. His telepathy tends to be less effective on beings that are less related to sea-creatures, although this is sometimes ignored