VS Battles Wiki
Register
Don't have an account?
Sign In
Advertisement
in: Injustice: Gods Among Us, Characters, Male Characters,
and 26 more 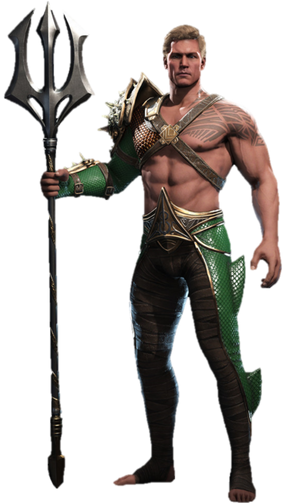 Aquaman is a playable character in Injustice: Gods Among Us and Injustice 2. He is classified as a Power User.

In Injustice: Gods Among Us, Aquaman’s contact with the surface world has been minimal, He’s only recently agreed to align Atlantis with Superman’s Regime. Subjugating Atlantis wasn't easy, but was necessary to retain some autonomy.

In Injustice 2, the Atlantean ruler has isolated his kingdom from the surface world’s affairs after a punishing defeat during the fall of Superman’s Regime. However his determination to keep Atlantis' independence may cost him, as new threats rise can Aquaman swallow his pride to protect his people.

Powers and Abilities: Superhuman Physical Characteristics, Water Manipulation (Can summon geysers of water to act as a barrier or tidal waves to flood the battlefield), Marine Communication, Animal Manipulation (In the form of aquatic life such as a great white shark or an octopus, was able to summon an entire swarm of massive crab beasts to counter Superman's Regime forces), Lightning Manipulation (With the Trident of Poseidon), Underwater Breathing (Type 2), Summoning (Can summon an Atlantean soldier to support him in battle), Portal Creation (Via From the Deep), Healing (Via Water of Life), Expert Combatant, Weapon Mastery

Standard Equipment: The Trident of Poseidon

Weaknesses: Lack of Water (becomes progressively weaker the longer he is without water)