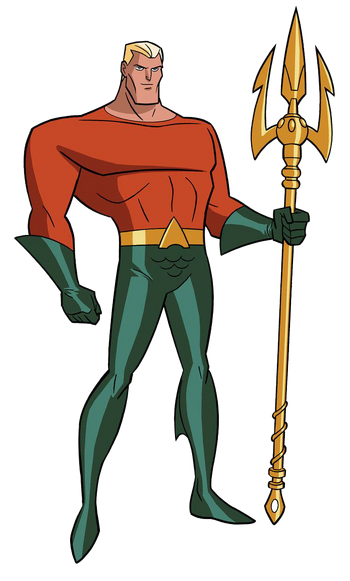 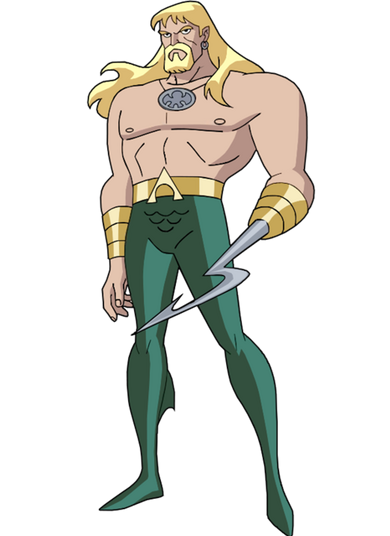 Aquaman is the king of the undersea city of Atlantis. He is very proud and severe. Aquaman sometimes allies himself with the Justice League, but he primarily acts to defend Atlantis. Nothing is more important to him than the well-being of his people.

As an Atlantean, Aquaman is endowed with superhuman strength and durability, as well as the ability to breath in both water and air. He also has telepathic control over sea life.

Powers and Abilities: Superhuman Physical Characteristics, Expert Hand-to-Hand Combatant, Can control animals and make them follow simple commands or turn them more aggressive, Water Manipulation (Is stronger at sea), Resistance to heat/fire and cold (Fought lava monsters and was unfazed by the North Pole's temperature), Energy Projection/Electricity Manipulation (via trident)

Attack Potency: Small City level (Fought Wonder Woman pretty evenly, though was knocked out by a single punch from Superman), higher underwater (The battle against Wonder Woman soon tipped in his favor once he brought her to the sea)

Speed: Relativistic combat speeds and reactions (Kept up with Wonder Woman and blocked many of her strikes), Peak Human travel speed underwater

Standard Equipment: None in Superman: The Animated Series, later gained a hook to replace his cut off hand

Intelligence: Above Average (A proper king and politician with skills rivaling those of Wonder Woman)