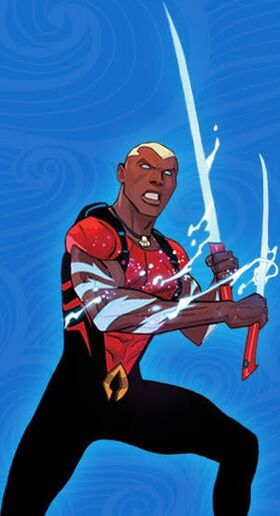 Jackson Hyde is Aqualad, a young superhero with hydrokinetic powers and an Atlantean Physiology. He was a member of the Teen Titans for a short time. He is also the son of super-villain Black Manta and the Atlantean known only by her surface alias Lucia Hyde.

Stamina: High (Can keep on fighting despite being severely injured)

Range: Standard Melee Range. Extended Melee Range with Waterbearers. Up to Tens of Meters with Electrokinesis.

Weaknesses: Relatively unexperienced with his powers.

Retrieved from "https://vsbattles.fandom.com/wiki/Aqualad_(Post-Flashpoint)?oldid=5858435"
Community content is available under CC-BY-SA unless otherwise noted.