VS Battles Wiki
Register
Don't have an account?
Sign In
Advertisement
in: Tier 9, Tier 9-B, Tier 8,
and 58 more 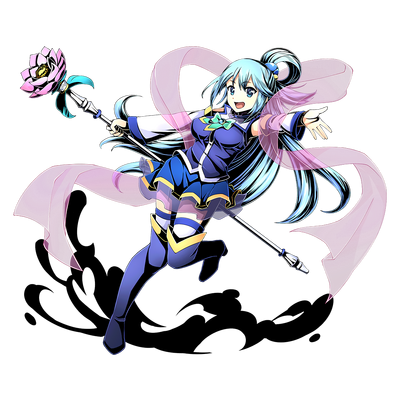 Powers and Abilities: Superhuman Physical Characteristics, Immortality (Type 1), Enhanced Senses (Has quite good senses, albeit it is downed by her idiocy), Extrasensory Perception (Able to sense souls), limited Power Mimicry, Partial Soul Absorption (Adventurers partially absorbs souls as EXP), Magic, Holy Aura, Water Manipulation (As a Goddess of Water, almost all of her arsenal revolves around water abilities), Transmutation (Any liquid she touch turn into water), limited Matter Manipulation (Can make cement dry faster by manipulating moisture), Non-Physical Interaction (Able to interact with souls), Soul Manipulation (Capable of sending souls to heaven and forcefully exorcising them), Existence Erasure (Purification erases undead entities, including liches. Can also make objects disappear with her party tricks), Life Manipulation (Able to manipulate and grow life, like plants), Plant Manipulation, Supernatural Bad Luck (Her luck is the lowest in the entire series, lower than Dust's and able to counter Kazuma's) Probability Manipulation (Able to increase the chance of outcome of her liking with Blessing, however her own luck counter the buff and can even go against Kazuma's), Reality Warping, Fire Manipulation, Underwater Breathing (Type 2), Purification (All types. Is capable of purifying poisons and sicknesses from water and people, is capable of exorcising lost spirits, removing curses, removing status effects, and erasing undead), Healing, Memory Manipulation (Can restore memories with her strongest healing spells) Statistics Amplification (Able to amplify herself and her allies with blessings), Resurrection (Capable of resurrecting other people, although the dead need to want to be revived in order to be resurrected), Sealing (Able to seal demons and even part of someone's body or abilities), Animal Manipulation (Able to command animals such as fish and doves), Power Nullification (With Sacred Break Spell), Empathic Manipulation, Holy Manipulation (Almost passive, even her tears and breath are holy in nature), Staff Mastery (Quite good at using her special staff), Attack Reflection (Via Reflect), Curse Manipulation, Forcefield Creation (Creates a barrier that deflects people such as Vanir), Teleportation, Spatial Manipulation, Telepathy (Telepathically contacted with Kazuma when his soul was in heaven), Telekinesis, Hammerspace (Can make objects such as a piano fit into smaller spaces such as a handkerchief with her party tricks), Size Manipulation (Can reduce the size of objects with her party tricks), Summoning (Summoned Spirits Of Water to aid her on multiple occasions), Resistance to Status Effect Inducement (People weaker than her can resist status effects), Magic, Holy Manipulation (As a Goddess with divine status, holy effects are laughable to her), Precognition, Clairvoyance (Consistently surprised Vanir, who couldn't read her), BFR (Teleportation Magic doesn't work on her), Disease Manipulation (Her holy nature naturally ward off diseases, preventing her from getting sick) Soul Manipulation, Curse Manipulation, Biological Manipulation, Probability Manipulation (Any curses, with her scarf, are ineffective), Darkness Manipulation, Death Manipulation (Can resist instant death attacks such as Vanir-style death ray), Life Manipulation and Absorption (Can resist Drain Touch and Heal, with the former absorbing both your lifeforce and mana), Likely Resistance to Time Manipulation (Time Magic can be resisted by those who possess high magic defense, meaning she should be capable of resisting it) | All previous abilities, Dimensional Travel, Portal Creation (Able to open a portal that connects heaven and Earth), Law Manipulation (Goddesses are the ones who set up the limits of the world), Clairvoyance (Can see what happens or happened in multiples universes), Resurrection (Can resurrect others and make them reincarnate), Fate Manipulation (Can decide the events of someone's future life to an extent)

Attack Potency: Wall level (Although her class isn't meant for direct combat, her high stats allows her to be on-par with normal adventurers, who can create golems taller than humans and fight monsters such as giant boars or 5 meters earthworms), Building level with Buffs (Can make someone comparable to Darkness with her blessings, which can be applied to herself), City Block level+ with Sacred Create Water (Stated to be magic on the same level of danger as Explosion in vol 1. Superior to the magic she uses to harm Wiz and Undead Dragons. And uses Axis Cult's power of faith, which is the same as Aqua's goddess form) | City Block level+ (As a goddess, she's comparable to gods such as the Treasure Island, whose size is that of the Tokyo Dome)

Standard Equipment: A Goddess Staff and a status preventing Hagoromo

Intelligence: Contrary to popular belief, Aqua is not completely stupid, she can be very observant and knowledgeable when she wants. At times, she and Megumin basically served as the team's walking encyclopedias.

Weaknesses: She is a pretty whiny girl that often complains, but can become serious in case of danger. Aqua lacks basic analytic skills and self-awareness to use her knowledge effectively. Her luck is so low it constantly put her in bad situations; it can even counter Kazuma's luck and her own buffs.

Johnny Test (Johnny Test) Johnny's Profile (Goddess Aqua and base Johnny Test were used, speed was equal, Johnny had his equipment, both were in character, the fight took place in Porkbelly)