VS Battles Wiki
Register
Don't have an account?
Sign In
Advertisement
in: Tier 2, Tier 2-B, Characters,
and 49 more 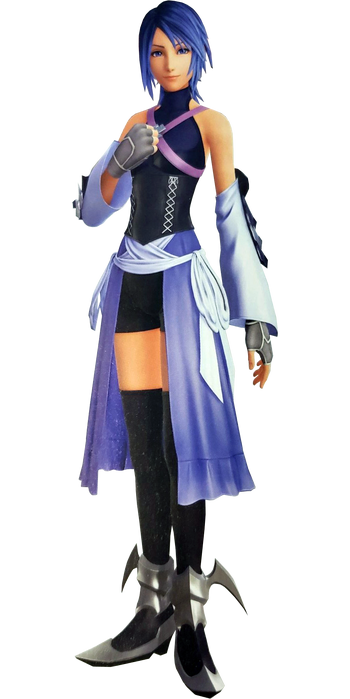 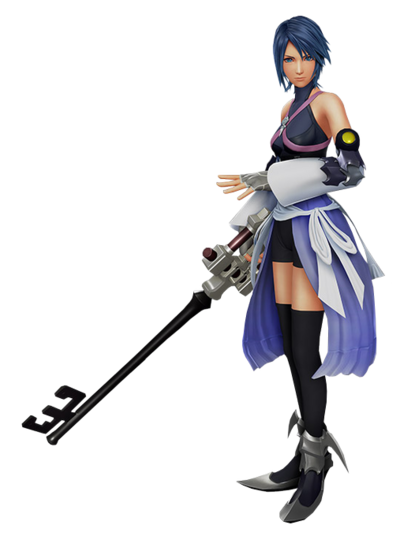 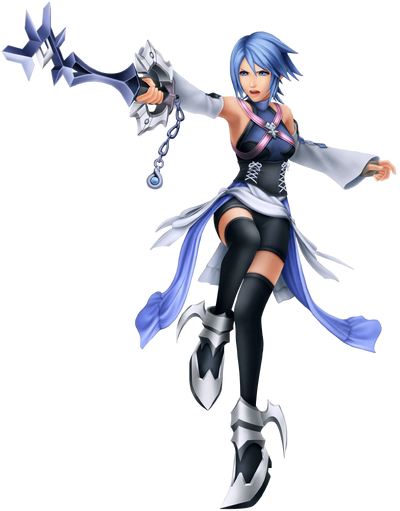 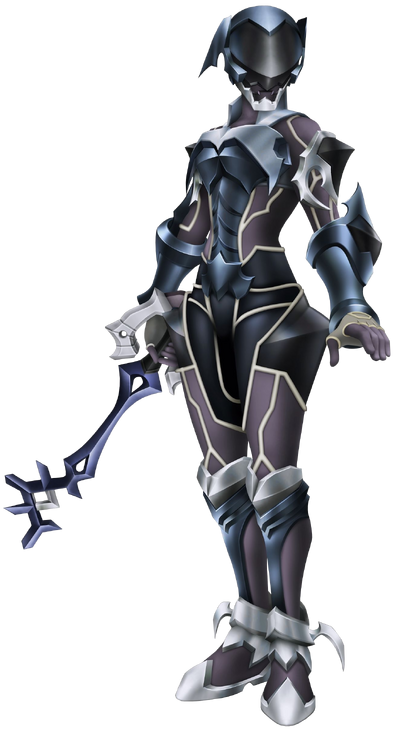 Aqua is a Keyblade Wielder who trained under Master Eraqus alongside her friends Ventus and Terra. The only one among the trio to be named a Keyblade Master, she is entrusted by Eraqus to monitor both of her friends after they leave the Land of Departure, but finds herself torn between her duties and her feelings of friendship.

Classification: Human, Keyblade Wielder and Master, One of the Seven Guardians of Light

Superhuman Physical Characteristics, Standard Keyblade powers, Energy Projection, Time Manipulation (In the form of slowing down and stopping time), Fire Manipulation, Ice Manipulation, Electricity Manipulation, Air Manipulation, Earth Manipulation (Via Terra's D-Link which has the Landbreaker technique that allows the user to break the ground), Explosion Manipulation (Via Explosion and Mega Flare), Magnetism Manipulation (Via Magnega), Gravity Manipulation (Via Zero Gravity and Transcendence), Invisibility (Via Vanish), Damage Boost (Can restore her own Focus Gauge by taking damage, Her reprisals after blocking deal more damage via Critical Counter, Her reprisals deal 50% more damage via Reprisal Boost), Afterimage Creation, Light Manipulation (Can use several light based attacks as a warrior of light), Darkness Manipulation (Via Ghost Drive), Plant Manipulation (Via Snow White's D-Link which has the Sweet Memory technique that can create twisters of flowers that attack enemies), Telekinesis (Can automatically collect nearby prizes and items via Treasure Magnet, Can yank out munny, health and D-Link prizes from her enemies via Munny Magnet, Energy Magnet and D-Link Magnet), Damage Reduction (Via Damage Control which halves the damage she takes if she's at low health, Via Donald's D-Link which has the Shell ability that can reduce damage from Magic attacks by 50%, Via Goofy's D-Link which has the Protect ability that can reduce damage from physical attacks by 50%), Teleportation, Enhanced Senses (Has a "map" in her head (While it could normally be dismissed as a game mechanic, the status effect in 358/2 Days that prevents access to it justifies it being an actual ability)), Information Analysis (Via Scan which allows her to view her opponent's health), Poison Manipulation (Via Poison and the Bio Barrage Shotlock), Healing (Via Curaga, D-Links and various items, Can heal herself by blocking attacks with the Renewal Barrier technique, Via Cinderella's D-Link which has the Regen ability), Resurrection (Her D-Link (Her power summoned by someone else) has the Auto-Life ability which revives the user with 25% of their health), Forcefield Creation, Size Manipulation (Minimizes enemies with Mini), Sleep Manipulation (Can put enemies to sleep via Sleep), Status Effect Inducement (Has a chance of stunning her opponents with Stun Edge, Can blind enemies via Blackout, Can inflict various status effects via Magic Pulse (Being confused, frozen, blinded or stunned)), Paralysis Inducement (Can bind enemies in place with bind), Confusion Inducement (Can confuse enemies with Confuse or the Chaos Snake Shotlock), Statistics Amplification (Can boost her stats tremendously via various Command Styles and D-Links, Defender increases Aqua's durability if she's at low health, Via Terra's D-Link which has the Overdrive ability that increases the user's strength if they have less than 25% of their health left, Can perform a strike that is three times stronger than usual via Wishing Edge), Instinctive Reaction (Her D-Link (Her power summoned by someone else) has the Magic Deflector ability which allows the user to occassionally automatically block elemental attacks, Via Terra's D-Link which has the Auto-Block ability that allows the user to automatically block frontal attacks, Via Ventus' D-Link which has the Auto-Counter ability that allows the user to automatically counterattack when blown away by an enemy attack, Via Zack's D-Link which has the Attack Deflector ability that allows the user to sometimes automatically guard when attacked), Master Keyblade Wielder, Aura (Via Spellweaver), Invulnerability (While healing herself (Via Leaf Bracer) or using the Teleport Spike technique), Teleportation, Power Bestowal (Cast a spell on Kairi, which helped her find her special one), Transformation (Can change her Keyblade's form and abilities using Keychains, Can transform her Keyblade into a Keyblade Glider which allows for Flight and travel between worlds), Vehicular Mastery (Over the Keyblade Glider), Homing Attack (With most spells and Shotlocks), Chain Manipulation (Bound a Demon Tide in chains of light), Sound Manipulation (Via Rhythm Mixer), Is able to hold on in a fight after taking massive damage or being comboed via Second Chance and Once More, Purification (Esuna and Panacea allow Aqua to remove negative status effects from herself, Via Cinderella's D-Link which has the Auto-Remedy ability that passively removes negative status effects from the user), Summoning (Can summon her main weapon and her Keyblade Armor, Via Snow White's D-Link which has the Sweet Seven technique that can summon colored gems that impact into enemies, Via Pete's D-Link which has the Rumble Rave technique that can summon Pete's race kart that he uses as Captain Dark, It also has the Fruit Shot technique which can summon a giant pineapple that bounces against the ground and bashes enemies, As Anti-Aqua she can summon a Demon Tower to assist her, restrain enemies and coordinate attacks), Flight (The Keyblade is capable of Flight, Can fly by herself while using the Raging Storm spell or the Sky Climber Command Style), Duplication (As Anti-Aqua she can create doppelgangers that copy her movements and spells)

Attack Potency: Multiverse level (Defeated Hades, Maleficent and the Ice Titan, should be at least comparable to KHI Sora) | Multiverse level (Bested Ventus-Vanitas, who at the time wielded an imperfect χ-Blade, can keep up with Terra-Xehanort, who can keep up with Lingering Will, who is above KHII Sora, is one of the most powerful magic users in the series rivaling the likes of those such as Mickey Mouse)

Speed: Massively FTL+ (Managed to keep up with Vanitas and Terra-Xehanort in a duel, capable of traveling between worlds (Which each reside in different solar systems) in short periods of time, comparable to others that can travel across the worlds with a Keyblade Glider, which has been shown to also relate to direct physical movements and is comparable to the Gummi Ship based on Aqua and Ventus getting to the Keyblade Graveyard within a day just like it while also including the threat of Gummi Heartless, comparable to Xemnas, who reacted to Roxas going from Radiant Garden to the Keyblade Graveyard in seconds, not far behind Sora, who reacted to a Keyblade beam from Xehanort of a similar nature as this one) | Massively FTL+

Striking Strength: Multiversal (Countered strikes from and physically held her ground against Ventus-Vanitas and Terranort, even managing to overpower the former after an extended clash of Keyblades) | Multiversal

Stamina: High (Survived in the Realm of Darkness, which erodes the Heart, without the protection of Keyblade Armor and a Black Coat for a decade, being assaulted by countless Heartless all the while)

Intelligence: The first among her friends to be recognized as a Keyblade Master, Aqua is an extremely accomplished Keyblade wielder. Specializing in the use of magic, Aqua gracefully dances around the battlefield while pelting foes with a variety of powerful spells, being arguably the most skilled Keyblade Wielder in the series short of Master Xehanort in this regard. She fights with almost dance-like grace, gliding and cartwheeling around the battlefield, utilizing unique variations of the common magic spells and specializing in the use of water, ice, and light in particular 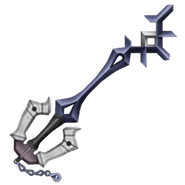 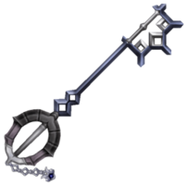 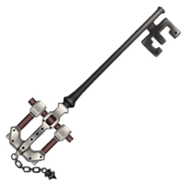