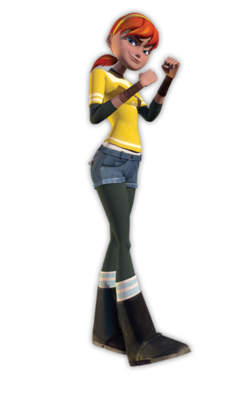 April O'Neil is a deuteragonist in Teenage Mutant Ninja Turtles.

April met the Turtles when she and her father, Kirby O'Neil were kidnapped by the Kraang. After being rescued by the Turtles, she became good friends with them and has cooperated with them on various missions.

Tier: 9-B physically. At least 9-A with her powers

Attack Potency: Wall level physically (Can defeat hordes of Footbots and Kraang droids, which can bash through and apart concrete walls with the barest of effort. Comparable to Casey Jones). At least Small Building level  with her powers (Is comparable to if not superior to the Turtles and possibly even Splinter. Contended with Super Shredder), can bypass conventional durability in several ways

Durability: Small Building level (Withstood an extended beating from Karai who is equal to Leonardo. Has withstood blows from other Mutants comparable to the Turtles)

Intelligence: Above Average combat-wise. Underwent 4 years of intensive training with Hamato Yoshi and thus became a full-blown kunoichi. Has experience dealing with various disasters and villains.

Weaknesses: Poor control over her emotions in certain situations. Has had trouble accessing the full extent of the powers available to her.