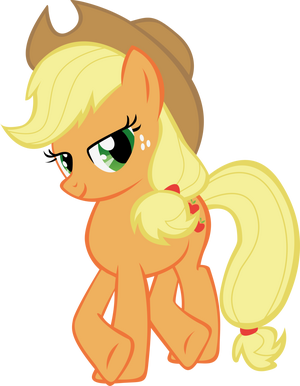 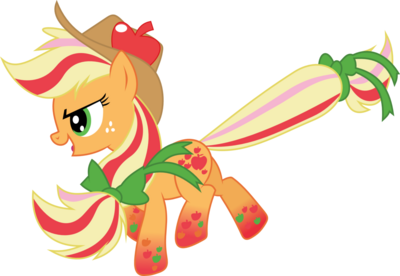 Applejack is one of the main characters of My Little Pony: Friendship is Magic and represents the Element of Honesty. She works on Sweet Apple Acres with her little sister Apple Bloom, her brother Big Macintosh, and her grandmother Granny Smith. Applejack is hardworking and, even for an Earth pony, quite strong. She often gets into friendly competitions with Rainbow Dash.

Name: Applejack, or AJ for short

Powers and Abilities: Superhuman Physical Characteristics, Skilled Fighter (Should be comparable to Rainbow Dash. Helped fight against the Changeling horde during the Canterlot Wedding) & Skilled at lassoing | BFR, Petrification & Sealing, Power Nullification of Resistance to Mind Manipulation, and limited Reality Warping by reversing the effects of Discord. Magical forcefields | Can give the stolen flight, strength and magic back to the ponies of Equestria, even the Alicorns, Unlimited Flight, Forcefield Creation | Superhuman Physical Characteristics

Lifting Strength: Class M (Was able to hold and throw back a large boulder), possibly Class G (Should be superior to random pegasi)  | Unknown | Unknown | Class 5 (Is able to tilt a parade float, and lift a school bus)

Stamina: Above Average (Can run the entire Running of the Leaves without showing wear in stamina) | Undeterminable | Likely Superhuman | Above Average

Standard Equipment: Her lasso, her Element of Harmony which is Honesty, and her Rainbow Power Chest

Intelligence: Above Average (Runs the whole farm and plans everything, her intellect thoroughly shown in her great planning skills and detail in the making of the Apple Family Reunion)

Weaknesses: She is a true workhorse, sometimes to her own detriment (Has overworked herself to the point of sleep deprivation, exhaustion, and hallucination), she can be stuck in her own ways and traditions at points and fail to see another's point of view | Can only reach these forms with the help of the rest of the Mane 6 | She grows seasick easily