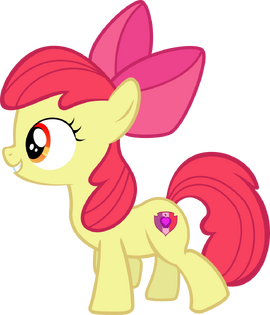 Age: Likely 10s, an adult by "The Last Problem"

Weaknesses: Has no fighting experience, but she can still fight with Scootaloo and Sweetie Belle. With the Cutie Pox, she is forced to do the talents that appear on her body, which exhausts her and could easily get in the way of a fight.

Key: Base Form | With Cutie Pox