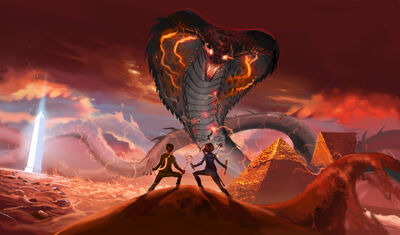 Apophis is the serpentine manifestation of chaos, or Isfet, who has been living since before creation itself. As the opposing force of order(Ma'at), Apophis hates creation and seeks to destroy it by devouring the sun god Ra, dissolving the entire world back to the primal state of chaos. Apophis's threat forced the House of Life and the Egyptian gods work together to stop him from achieving his ultimate goal.

Name: Apophis, The Great Serpent, The Dreaded One, The Hated One,

Classification: Serpentine manifestation/god of Chaos or Isfet, Darkness and Night

Powers and Abilities: Superhuman Physical Characteristics, Immortality (Types 1, 3, and 8), Regeneration (Low-Godly, like any other god he can reform himself in the duat if he is killed, although this is likely non-combat applicable, due to the amount of time it takes), Possession, Reality Splintering, Chaos Manipulation, Non-Corporeal, Conceptual Manipulation and Abstract Existence (Embodies chaos and destruction, which his sheer presence radiates), Paralysation, Resistance to Transmutation, Mind Manipulation, and Soul Manipulation

Attack Potency: At least Multi-Continent level (Most powerful being in all of Egyptian Mythology; overpowered an army of gods and Magicians, including Ra, the most powerful god, who needs his lieutenant Set to fight the great Serpent on equal terms; As the manifestation of chaos his power is associated with natural disasters, like earthquakes, floods, tornadoes of apocalyptic proportions), likely Planet level (More powerful than Ra, who created the world and has the power to destroy all of creation by swallowing Ra)

Speed: At least High Hypersonic+ (Should be at least comparable to other gods like Set)

Durability: At least Multi-Continent level, Immortality and Regeneration makes him difficult to kill

Stamina: Infinite (As the embodiment of chaos, a part of reality, his stamina is endless; fought Bast for millennia in never-ending combat)

Intelligence: Immortal being that existed since creation

Weaknesses: Can be destroyed if a magician casts an execration spell on his sheut