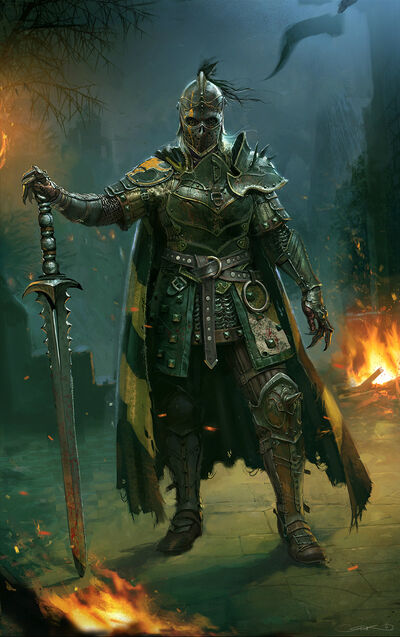 Apollyon is the Warlord of the Blackstone Legion, and the primary antagonist of For Honor. She holds admiration for the warriors of all three factions, but is disgusted that they have begun setting aside their military ways in favor of peace. Her ultimate goal is to usher in, as she herself calls it, the "Age of Wolves", turning all armies against one another and starting a new, great and never-ending war. She believes that might makes right, and that war is the natural way of humanity, viewing peace as a deplorable anomaly that only serves to decay men into sheep awaiting to be slaughtered.

Age: Unknown, middle-aged (Is gray-haired, and was an adult soldier 20 years before the game's story began)

Powers and Abilities: Superhuman Physical Characteristics, Weapon Mastery (By far the most skilled warrior in For Honor, capable of wielding nearly any kind of sword, battle-axe, mace, halberd, etc. with ease), Martial Arts Master (A fighting genius who can fight against multiple Heroes at once, be then any class of Knights, Vikings or Samurai, and adapt to their fighting styles)

Attack Potency: Wall level (By far the strongest character in For Honor, capable of murdering numerous Hero characters in quick-succession with ease, who themselves are capable of mowing down through hordes of armored soldiers effortlessly and crushing armored skulls, leaving nothing behind in the process. Pierced through a Knight in full-plate armor and chainmail with a one-handed sword trust as if he was paper. Capable of easily dismembering and decapitating soldiers in full-plate armor even while having a dagger stabbed into her abdomen)

Speed: At least Subsonic (Blitzes through Hero characters without them even reacting, who themselves can easily dodge arrows and fight against dozens of regular soldiers)

Lifting Strength: Class 1 (Casually lifted an adult fully-armored soldier above her head with one hand. Can easily wield a Greatsword, or a Nodachi as large as herself one-handedly)

Durability: Wall level (The most durable character in For Honor, tanking inhuman amounts of punishment during her final fight with the Orochi, and still fighting. Her armor is far superior to even that of the Hero characters, which itself can tank arrows that pierce through soldiers in gambeson and chainmail. Is stabbed in the abdomen by a dagger that tore through her own armor, and wasn't affected in the slightest)

Stamina: Superhuman (Capable of continuing fighting even after being stabbed in the guts, with little to no consequences)

Range: Extended Melee Range (Towers over every other character she interacts with, being perhaps the tallest Warlord of the game, which would make her around 7 Feet tall, and wields a Greatsword as large as herself in combat)

Intelligence: Incredibly Intelligent. Is the undisputed Warlord of the Blackstone Legion, an undefeated military genius and among the most skilled combatants in the entire setting, fighting with a style all of her own. Has been orchestrating the entire War, manipulating all three factions without them realizing. 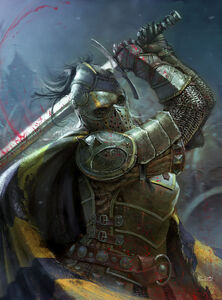 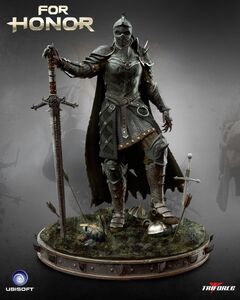 Start a Discussion Discussions about Apollyon (For Honor)