VS Battles Wiki
Register
Don't have an account?
Sign In
in: Characters, Female Characters, Granblue Fantasy,
and 35 more 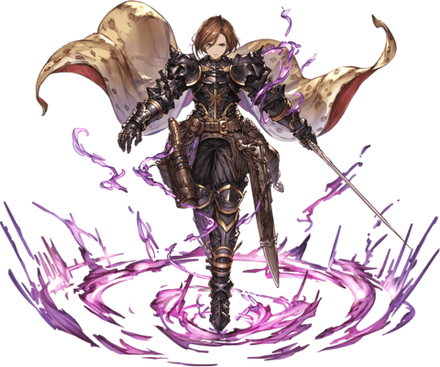 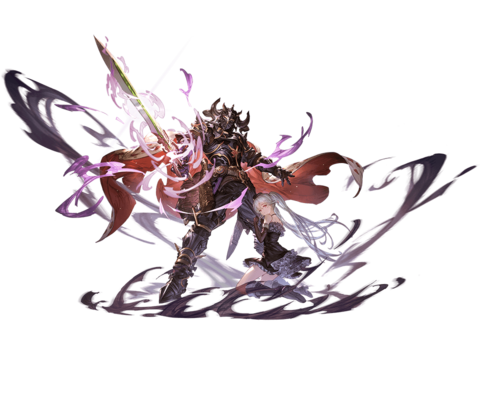 Top adviser and effective ruler of the Erste Empire. Despite being the person primarily responsible for developing Erste from a small country into a military superpower in just a matter of years, the Black Knight doesn't appear to be obsessed with power or authority. Instead, she acts according to her own motives apart from those of the Empire. The Black Knight knows Lyria's secret and frequently appears with the mysterious girl Orchis in tow, always leaving you with a trial to overcome before vanishing from sight.

Powers and Abilities: Superhuman Physical Characteristics, Aura (Can exude dark aura while activating her powers), Sword and Gun Mastery, Darkness Manipulation and Spatial Manipulation (Obsidian Moonlight and Sword of Delusion lets her shatter space with dark energy), Absorption and Life Manipulation (Can drain Life force from the target with Drain and Onyx Drain and her Weapon Blutgang allows users to drain energy from the target), Instinctive Reaction (While weilding Blutgang passively activates Onyx Drain while nearing critical state to heal her), Blessed (chosen and worthy of the title Black Knight which makes her Equal to Luminary Knights that can travel the Grim Basin without Sky Pieces), Magic and Elemental Manipulation (Can use Tetra Elements and dark magic), Enhanced Senses (Sovell mentioned that she can easily sense malice and thirst for blood from anyone near her), Fear Manipulation (Acumen fears and distresses enemy preventing them from charging up and using their special attack and can stall them with Quadspell), Statistics Amplification and Statistics Reduction (Can amplify her strength and defenses while also reducing enemies defense and strength with Onyx Drain and Quadspell), Awakened Power (Blutgang awakened its true power in response to Apollo that is unknown even to Sovell who has been with Erste for almost all his life), Resistance to Power Nullification (Protector's Sword, Moonshade and Onyx Drain's attack potency increase can resist nullification), Willpower Manipulation, Mind Manipulation and Paralysis Inducement (resisted Yggdrassil Malice's passive).

Attack Potency: Star level (Stalemated Golden Knight who casually stomped The whole Crew post defeating Akasha, Luminary Knights are comparable to The Eternals such us Seofon) higher with Blutgang (Blutgang awakened its true power which surpasses even a Luminary Knight)

Speed: Massively FTL+ (Was able to react and attack the crew who has already defeated Akasha should be comparable to Blue Knight who fought Seofon)

Lifting Strength: Stellar (Should be Comparable to Blue Knight who fought Seofon)

Striking Strength: Star Class (Should be comparable to Blue Knight who injured an Eternal comparable to Seofon, far stronger than before with Blutgang awakened)

Stamina: High. fought Freesia while she is endlessly resurrected by Mithra then later fought the crew in Mephorash after the whole ordeal from Agastia

Intelligence: Gifted (Was able to rise up to the ranks faster than anyone without having any military background studies and turned Erste into a Military Superpower from a small kingdom in a matter of years dominating the majority of the main islands in Phantagrande)

Weaknesses: She sometimes uses Dark Essence to amplify her capability beyond her own which has a lasting side effect that makes her completely tired or weakened. No longer uses dark essence after losing to the crew and obtaining Blutgang