VS Battles Wiki
Register
Don't have an account?
Sign In
in: Characters, Ace Attorney, Game Characters,
and 17 more 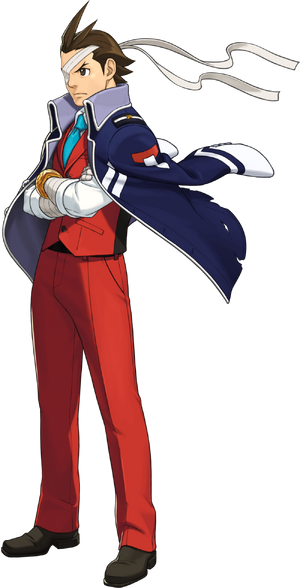 Apollo Justice is a defense attorney who has operated in the United States and Khura'in. He started off working for Gavin Law Offices, but after his first trial, he was taken under the wing of Phoenix Wright at the Wright Anything Agency. Along with co-counsel Trucy Wright, prosecutor Klavier Gavin, and mentor Phoenix, Justice participated in a test trial for the Jurist System in 2026, which was an effort to reintegrate the jury into court proceedings.

Powers and Abilities: Genius Intelligence, Photographic Memory, Preparation, Social Influencing, Limited Enhanced Senses with Bracelet (When talking to someone, he can understand if they are lying by sensing their facial twitches and other habits), Resistance to Social Influencing (Capable of seeing lies and not falling on tricks of witnesses and prosecutors, who can manipulate the people in court)

Attack Potency: Athlete level (Should be comparable to Phoenix Wright)

Intelligence: Genius (Has solved many cases as hard as the ones solved by Phoenix Wright, and has debated with him)

Weaknesses: He does not have any combat training.

Note: The explosion Apollo withstood should be considered an outlier until more feats of that level are available.