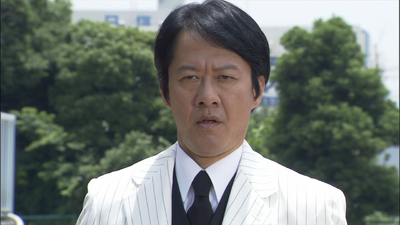 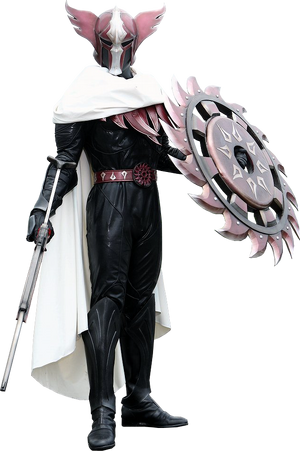 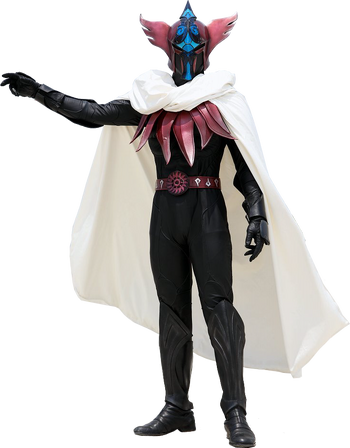 Apollo Geist (アポロガイスト Aporo Gaisuto) is the Security Chief of Dai-Shocker, hastening the worlds' convergence to make invasion easy for his organization. He normally assumes the form of a man called Guy (ガイ Gai) until he invokes "Apollo Change". Originally from the World of X-Rider, he was revived by the Government Of Darkness after being killed by X-Rider. However, his lifespan is short as a result and thus uses the Perfecter to take the life force out of people to augment his own. With his Perfecter stolen from him and destroyed by Decade, Apollo Geist came up with the plan to marry Yuki, the Fangire Queen from the World of Kiva, becoming a Fangire as a result. As a result of his transformation, he now becomes Super Apollo Geist (スーパーアポロガイスト Sūpā Aporo Gaisuto) with the ability to remove other realities from existence

Powers and Abilities: Superhuman Physical Characteristics, Transformation, Absorption with Perfecter (He can take the life force out of people to augment his own due to his short lifespan), Energy Projection, Portal Creation (He manipulation the dimension wall which he used to travel through dimensions or summon kaijins) | Same as before, plus Longevity, Reality Warping, Existence Erasure.

Intelligence: Above Average (Is the Security Chief of Dai-Shocker and in charge of many Kaijins from different worlds)

Retrieved from "https://vsbattles.fandom.com/wiki/Apollo_Geist_(DCD)?oldid=6553786"
Community content is available under CC-BY-SA unless otherwise noted.